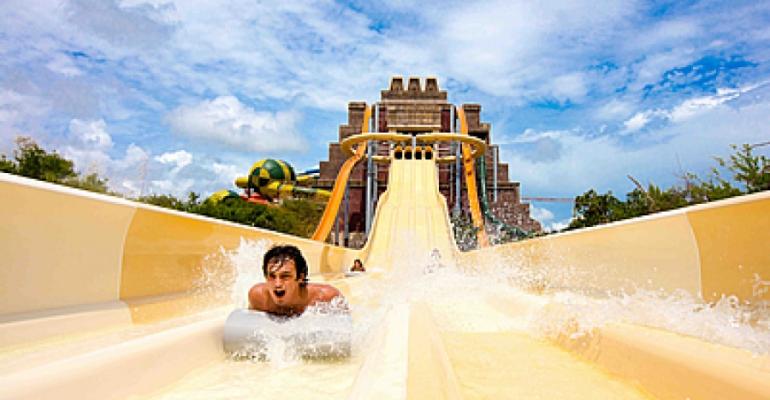 Water slides sprout from a giant pyramid that forms the centerpiece of the Lost Mayan Kingdom (Photo: Costa Maya)

'The guest comments are amazing and the volume of participants is increasing every day,' Robert Shamosh, vp marketing and sales for the port, told Seatrade Cruise News.

This major attraction on the Yucatán Peninsula offers water slides, zip lines, a lazy river float, a children's water park, teen area, forest trails, snack bar and souvenir shop. It's all built around a Mayan theme, with an Indiana Jones-style adventure flavor, according to Mauricio Hamui, ceo of ITM Desarrolladores, who oversaw the new development.

Costa Maya ramped up for the early opening on Nov. 5, when two ships were in port—Carnival Valor and Norwegian Star—by inviting local residents to try the facilities. Some 208 people did so on Oct. 24, 599 a day later and 1,022 the day after that. Since everything went smoothly and the attractions were able to handle all the visitors without congestion or long lines, the park opened 10 days ahead of the planned Nov. 15 date.

As earlier reported, cruise executives from a wide range of lines were extremely enthusiastic about the Lost Mayan Kingdom after previewing the attraction in October following the Florida-Caribbean Cruise Association Conference and Trade Show in Cozumel.

The water park is located adjacent to the Costa Maya cruise terminal, which has been restyled along the explorer theme and also now provides a range of new food and beverage concepts that highlight Mexican and Latin American cuisines. There's a new microbrewery on site, too.

Admission to the Lost Mayan Kingdom is US$89 for adults and $79 for children (based on height). The amount is the same whether purchased on a ship or at the gate. Cruise lines are actively promoting the attraction.

Costa Maya plans a further development, Journey to the Mayan Legends, a circuit highlighting key cultural symbols. Shamosh said that is planned to open next winter.