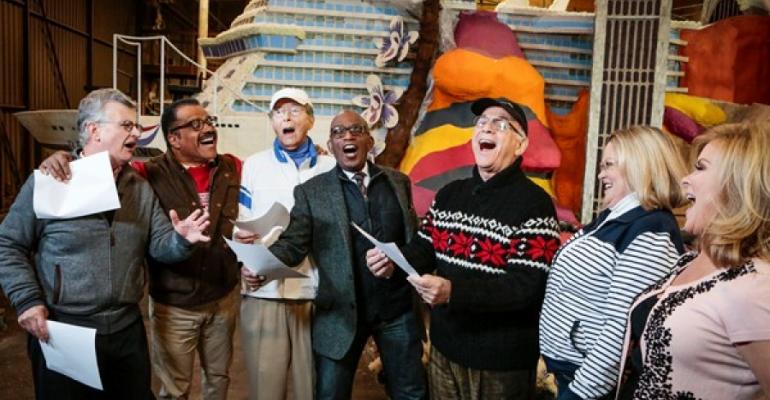 The original cast of 'The Love Boat' gathered to decorate Princess Cruises’ Rose Parade float Tuesday, and to give national and local media interviews including an appearance on the 'Today' show.

The Princess float in the Rose Parade will launches the line's 50th anniversary year and pay tribute to the television show that played such an integral role in modern cruising's early history.

The original cast of 'The Love Boat' will ride on the float, which comes on the heels of this ensemble serving as godparents for the Regal Princess christening in November.

Named '50 Years of Inspiring Travel,' the float depicts Regal Princess sailing through cruise destinations and landmarks passengers have experienced with Princess over the past 50 years. Among them are the Sydney Opera House, the leaning tower of Pisa, the Eiffel Tower, Big Ben, a traditional Japanese pagoda, the Golden Gate Bridge and the tropical flowers and waterfalls of the Caribbean, Hawaii and Mexico, as well as mountains and wildlife representing Alaska cruises.

The float is 60 feet long and 24 feet high with more than 24,000 flowers and natural materials. The flowers include roses, orchids and carnations, dendrobs, tulips, cymbidiums, delphiniums and gerbera daisies. Regal Princess will be covered in large white navy beans, white mums and button mums. The water will be accented by dark blue and white iris. Potatoes, green grapes and seaweed will also be used on parts of the float.