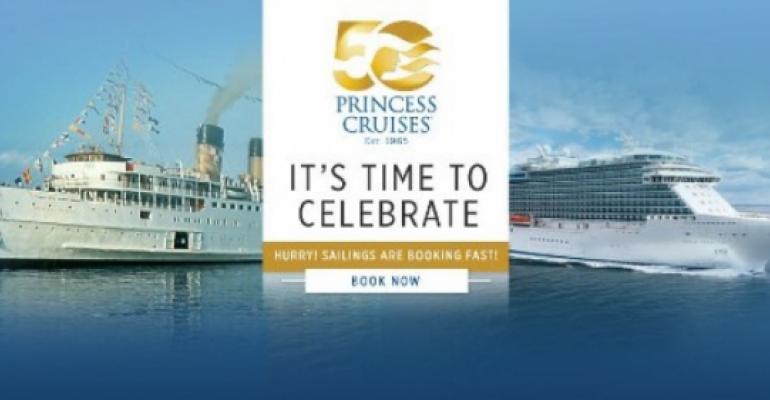 The 50th anniversary of Princess Cruises will include a themed menu, special cocktails and entertainment on 2015 sailings.

A 'Love Boat' disco deck party will create a '70s theme night with a few surprises. The poolside giant screen Movies Under the Stars will showcase video messages from the original 'Love Boat' cast, special montages from the show, a 'Love Boat' sing-a-long and show trivia, '70s music videos and even a live kiss cam.

The party will also feature a production number, a celebration of weddings and anniversaries of passengers, a photo opportunity with a 'Love Boat' life ring and dancing with a party band.

One night on every cruise, the main dining rooms will present a souvenir menu with commemorative dishes from the past five decades, including duck terrine with apricot preserves and filet of turbot with truffle chive sauce. Princess chefs will also introduce a variety of new anniversary pizzas such as spicy tomato and shrimp; potato, bacon and brie; and Thai.

As part of the new 'Chocolate Journeys' experience, master pastry chef and chocolatier Norman Love has created two 50th anniversary desserts, and inventive cocktails from mixologist Spike Marchant along with popular drinks through the decades.

A 50th anniversary celebration in the Piazza will feature a golden balloon drop and some balloons will enclose surprise give-away items. An anniversary song commemorating the line's history and game shows and trivia challenges are other activities. Plus, on some sailings, passengers can dance to the music of tribute bands like the Beatlemaniacs.

Anniversary decor and signage will be displayed from the time passengers arrive at the terminal (domestic homeports only) and be visible through various on-board touches, including a spectacular anniversary display cake presented in the atrium.

A series of videos will play on stateroom televisions that share the company’s history and milestone moments. Each ship in the fleet will be adorned with a 50th anniversary flag on the bow.