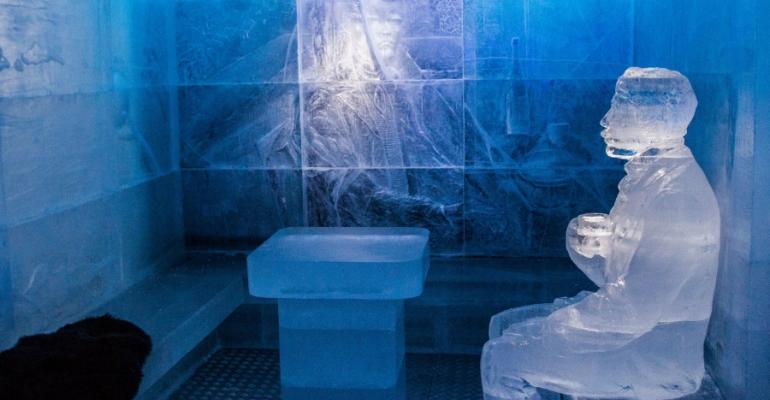 Ice sculptures of European artists feature in the Olso venue
Magic North has opened a new Magic Ice bar in Oslo’s city centre. This is the third of its trademark venues worldwide.

Kirsten Holmen, majority owner of Magic North, started the first Magic Ice in Svolvær on the Lofoten Islands, ten years ago. A second venue, followed on St. Thomas in the Caribbean, in 2012.

Both venues are well visited by cruise passengers on excursions, as well as independents, she remarked. ‘Last year we had almost 50,000 visitors through the doors of Magic Ice in St Thomas, and in Lofoten.’

The mayor of Oslo, Fabian Stang, joined Holmen and other guests at the Olso opening where Edvard Munch's art is an important part of the ice sculptures. Other popular European artists are featured throughout the bar, including German philosopher, poet and composer, Friedrich Nietzhe (pictured).

Holmen expects between 40 to 50,000 visitors through the doors of the Oslo ice bar in its first year of operation. Many have made advanced bookings and cruise passengers are an important source, she noted.

‘Last Wednesday and Thursday the venue was fully booked by visiting cruise ships,’ Holmen told Seatrade Insider. ‘It is located in the heart of the city and many of the cruise lines are featuring it as a stopover on walking tours of Oslo. It is located around 15-20 minutes walk from the cruise berths.’

Holmen is not stopping at three ice bars, she is now looking at other locations both in Norway and further afield. ‘Bergen is an option and we are also in dialogue with a  cruise line regarding opening  a venue on one of their private islands,’ she commented.