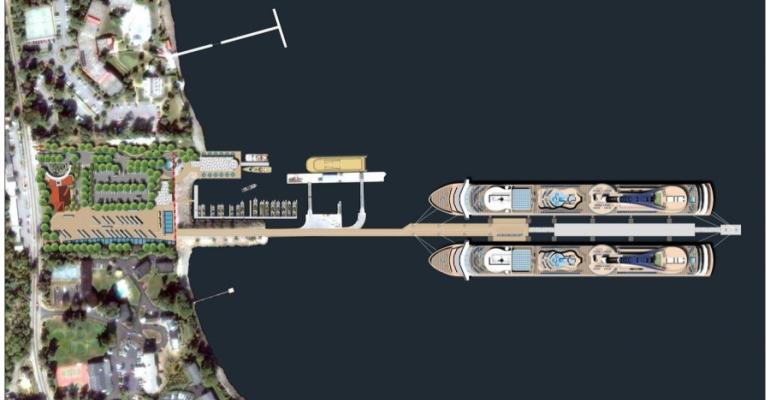 An idle ferry terminal could be developed with a floating pier extension to serve cruise ships (Rendering: Bermello Ajamil & Partners)

Maine's leading cruise destination, Bar Harbor, is inching closer to having a berthing facility in the coming years that would be developed on the site of a former international ferry terminal.

'Bar Harbor is a marquee port on the Canada/New England itinerary. [A cruise pier] would benefit all ports in the region,' said Paul Paradis, chair of the Bar Harbor Town Council and a member of the Bar Harbor Chamber of Commerce Cruise Ship Committee.

Currently all but the smallest cruise ships tender, presenting operational challenges and, sometimes, congestion in the center of this charming and historic summer resort that's the gateway to Acadia National Park, one of America's most visited national parks.

The Maine Port Authority (MPA) has been in talks with Canadian crown corporation Marine Atlantic to acquire the ferry terminal property since 2012, and an agreement is now very close.

Adam Goldstein, president and chief operating officer of Royal Caribbean Cruises Ltd., said Bar Harbor consistently ranks among passenger favorites globally. However, as Goldstein recently told the Canada/New England Cruise Symposium in Bar Harbor, a terminal is important since a ship like Anthem of the Seas—booked for five calls next year—may be able to tender for a limited season or two, but 'over time, it's got to have a dock.'

If the terminal plan goes forward, Bar Harbor ultimately could have a floating two-berth pier to accommodate ships, with ample space for tour dispatch and facilities for Customs and Border Protection. (As Maine's busiest port of entry, this season Bar Harbor will accept 45 foreign arrivals requiring CBP inspections, according to Amy Powers, director of CruiseMaineUSA.)

The site could even provide a pier for dispatching water tours and/or a water taxi linking to downtown Bar Harbor. It's also possible a tram or shuttle could transport cruisers between the terminal and the town.

The ferry site is located about one mile outside Bar Harbor along tree-lined State Route 3, which leads to Acadia National Park and the mainland. That busy corridor is scheduled to be reconstructed into a multi-use path by fall 2016, Paradis said.

According to Paradis, MPA is looking at a lease-purchase agreement of the approximately five-acre site, and there is strong congressional support for the project from Maine senators Susan Collins and Angus King.

While a number of possibilities are being studied for what Paradis said would be a long-term project, it's possible that near-term improvements could enable tender reception facilities for ships at Anchorage B, cutting what is now about a 15-minute ride to three or four minutes. The area is protected, he noted, which would facilitate operations in inclement weather.

Further in the future, a pier could be extended out to the deep-water area to take two ships alongside, without requiring dredging.

'We've been told for years that lines don't like to tender,' Paradis said, adding that a terminal 'would help a lot of our issues here.' Tendering shortens a cruise visitor's time in Bar Harbor by several hours. If ships were able to dock, both morning and afternoon tours could operate, spreading out traffic and easing congestion in Acadia National Park.

The ferry terminal has been idle since 2009. Paradis noted the facility is flanked by 'two very nice hotel properties' and said Bar Harbor residents would like to see the empty site put to good use.

However, the MPA wants more information regarding financing, operations and business opportunities prior to taking control of the site, and Bermello Ajamil & Partners is leading a study to determine business and market opportunities, cash flow needs and projections, a five-year capital and operations budget, a 36-month operational budget and evaluations of different operating models, along with other items.

A dozen senior cruise line executives had the chance to visit the site during last week's Canada/New England Cruise Symposium.

'RCCL supports the conversion to the extent it provides our vessels the ability to dock safely, and coexists harmoniously with the community. We believe that our guest experience would benefit greatly from the project, which includes a modal center,' Nason told Seatrade Cruise News.

'While the initial concept and plan appears to offer many benefits,' he added, 'it's important that planners also carefully consider the need for safe passageway and transportation to and from the site to downtown Bar Harbor. We will continue to work closely with planners and the community to provide input as the plan develops.'

Nancy McKechnie, executive director, Bar Harbor Chamber of Commerce, said the cruise business is important to the local economy and the chamber welcomes the project. She described the cruise sector as 'robust,' with 143 calls booked this season.

'We expect to hear within the next couple weeks if the ferry terminal purchase will go through,' McKechnie said.