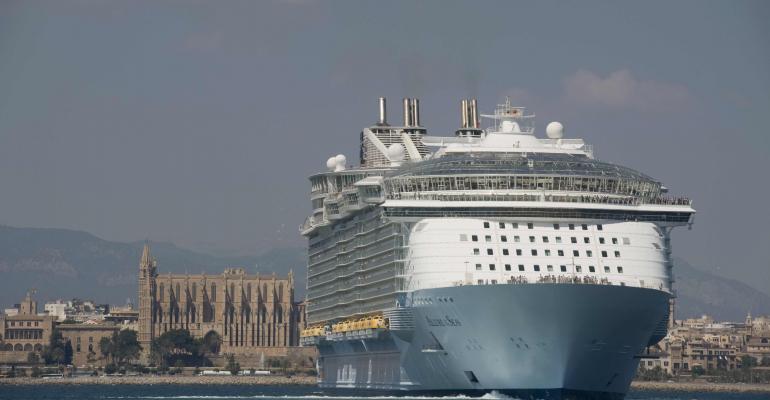 Allure of the Seas in Palma, where some are fed up with mega-ships and the many passengers they bring PHOTO: David Arquimbau

About 100 people attended a rally at the Maritime Station 2 of Palma de Mallorca this week in support of cruise tourism and calling for a study on the impact of air emissions from cruise ships.

Organised by the Federation of Small and Medium Enterprises of Mallorca and supported by numerous local business associations, the rally came in response to a recent campaign launched by local NGOs with the aim of limiting cruise tourism in the capital of Mallorca.

Call for one-ship limit per day

The campaign, 'Manifesto against mega-cruises' was launched by some 25 NGOs earlier this summer, claiming that 'the tourism of mega-cruises at Palma has increased in unsustainable and undesirable ways for our city, causing a serious environmental and territorial impact as well as growing social protests.'

The petition asks the Balearic Islands government and Palma city council to limit calls by mega-cruise ships at Palma to one per day, and cap the number of cruise passengers at 4,000 per day. The authors of the petition did not define 'mega-cruise ship' nor whether other, smaller cruise ships could visit the port along with one 'mega-ship.'

In addition, the petition asks the port authority to control and publicly announce the daily air emissions and electricity and water consumption of the ships in port, and to demanded the 'tax and labour transparency of all cruise companies that visit the city.' The NGOs also seek an increase of the local eco-tax for cruise passengers to €5 per day.

Eventually — albeit neither the Balearic Islands government nor the Palma City Council is the appropriate addressee for this sort of claim — they demand the Mediterranean to be declared an Emissions Control Area.

Among the campaigners are the leftist Anticapitalistes Illes Balears, the local offspring of Fridays for Future, and some regionally relevant groups as the Grup Balear d'Ornitologia i Defensa de la Naturalesa (GOB). Established in 1973, GOB is the largest environmental protection group in Mallorca and the neighbouring Balearic Islands.

As of today, the 'Manifesto against mega-cruises' had received 11,200 signatures, with the aim for 25,000. The names of 36 supporters have been released online — more than 20 of them are artists, writers, singers and composers, while only a handful are associated with tourism or business in general.

In contrast, a pro-cruise manifest received support from Palma's and Mallorca's economic leaders. At Tuesday's rally in Palma, the president of the Federation of Small and Medium Enterprises of Mallorca (PIMEM) read this manifest signed by more than 40 entrepreneurs and business institutions, including the taxi drivers associations and those representing maritime services, coach operations and travel agents. Also, the official Council of Balearic Islands Tourist Guides supported the manifest, which emphasized the importance of cruises in the economy of Palma.

The manifest asks competent institutions to protect cruise tourism and the related local jobs and to promote this type of tourism, while at the same time stresses the signees' commitment to environmental protection. The manifest also suggested taking a closer look at the air emissions impact of cruise ships, adding that funds gained from the local eco-tax could be used to finance it. At Tuesday's rally, participants shouted 'Sí a los cruceros' (Yes to the cruise ships), and wore T-shirts sporting the same legend.

Palma de Mallorca in recent years gained massive popularity both as a transit and turnaround port. According to Autoritat Portuària de Balears statistics, Palma recorded 2,051,782 passengers last year, including 1,193,354 in transit, a 28% increase, and 858,428 turnaround passengers, a 15% increase.

An important driver of Palma's recent boom are Germans, as the island has, for decades, been among the Germans' preferred holiday destinations with ample flight connections from major cities. AIDA Cruises and TUI Cruises have frequent calls at Palma, AIDAperla was christened there in 2017.

Perhaps the pressure on Palma could be eased by considering other ports in the Balearic Islands. For example, Alcúdia in the northeast of Mallorca, Mahón in Menorca and Eivissa in Ibiza Island are underused.

Neither Mahón nor Alcúdia has scheduled turnarounds though both ports could handle smaller ships for those operations.

Alcúdia puts out the welcome mat

Local authorities in some of the smaller ports are encouraging cruise tourism.

Suggestions have been made to divert some of Mallorca's cruise traffic to Alcúdia, which provides an attractive alternative to Palma for smaller, upmarket vessels. The port — which started taking cruise ships regularly in 2012 following an expansion of its infrastructure — cannot handle big ships.

During a call by Oceania Cruises' Sirena in June, Alcúdia's Mayor Bàrbara Rebassa expressed the desire for further upmarket ships, 'with measure and responsibility.' Rebassa added she wants to encourage shore excursions in the Alcúdia area.

The port, which also handles ferry traffic to Ciutadella (Menorca) and to the Spanish mainland, opened a modern passenger terminal a few years ago and could also handle turnarounds. It is a 65-kilometre drive from Palma's airport.