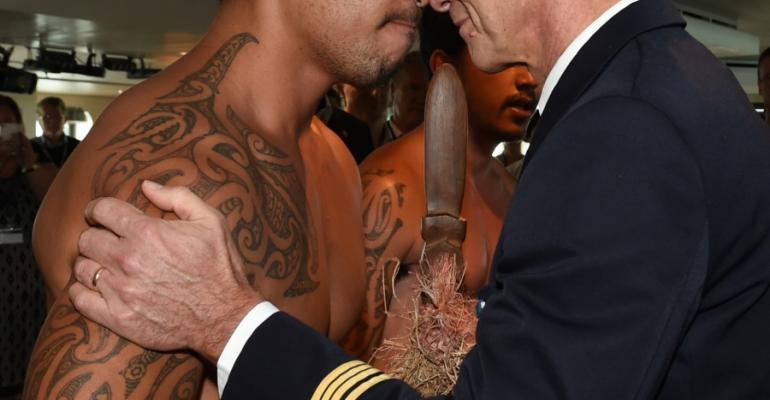 The hongi is when two people press noses and foreheads and is a sign the Maori is with someone he or she trusts. It recalls the Maori legend when Tane, the god of the forest, breathed life into the nostrils of the first earthly woman, Hineahuone, he had created from clay.

The mayor of Auckland, Len Brown, and Jean-Marc Depierre, director of New Zealand’s Alliance Francaise, were on hand for the exchange of plaques.

L’Austral is currently sailing from Auckland to Melbourne via Tauranga, Wellington, Picton, Nelson, the Milford Sound and Hobart.

After she arrives in Melbourne on February 3 she will sail back to Auckland.

On February 15 she sails from Auckland to Darwin via Bay of Islands, Norfolk Island, Brisbane, Percy Island, Townsville, Cairns, Thursday Island and Yirrkala. She departs Darwin on March 4 for Hong Kong.