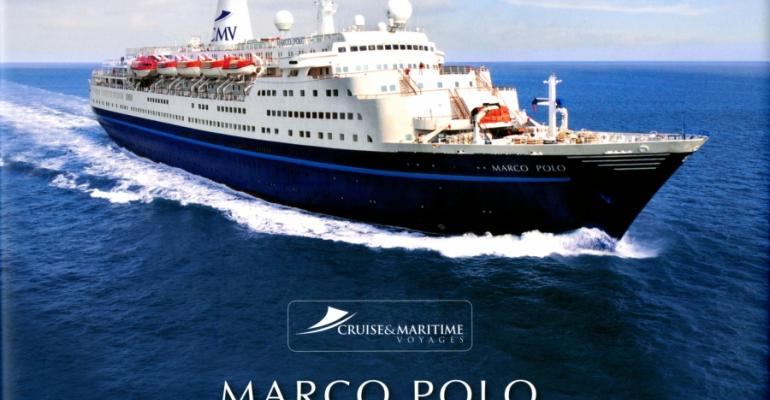 Purchased by Global Maritime Group in 2007 and currently operated by UK-based Cruise & Maritime Voyages, the vessel was built in 1965 at Mathias Thesen Shipyard in eastern Germany.

Out of five sister ships known as the Russian Poets, built for the Soviet Merchant Marine Ministry at the Wismar yard between 1963 and 1970, Marco Polo is the only one still in service.

1991 was a pivotal year for Marco Polo when, as Alexandr Pushkin, the ship was acquired by British shipping entrepreneur Gerry Herrod and his group. The vessel was rebuilt in Greece and renamed Marco Polo operating under the Orient Lines brand.

Nikolaos Tragakes, chairman of Global Maritime Group, writing in the foreword of a new book, 'Marco Polo - Celebrating Fifty Golden Years of Ocean Travel,' states, ‘Looking back at her remarkable career Marco Polo has probably covered more nautical miles and visited more ports of call than virtually any other cruise liner afloat today and is still powered by her original main engines.’

The 100-page commemorative book plots the vessel’s 50 years in great detail and draws together a collection of historic and modern images of the ship.

The final chapter is devoted to Marco Polo today with information about the interiors and daily operations. Unusual today, the open timber decks allow passengers to walk right around the ship.

Chief engineer Georgios Katsifarakis is a huge enthusiast for his ship describing her as ‘the last Rolls-Royce from the golden era of travelling at sea’.

The chief engineer insists that, based on his long experience of working with different models of Sulzer engine, Marco Polo’s are by far the most reliable type – ‘simple, strong and easy going’.

The pinnacle of this year’s anniversary cruise calendar is Marco Polo’s 36-night sold-out commemorative voyage to Canada and Greenland sailing from London Tilbury on July 24 retracing part of the ship’s regular transatlantic liner service from Leningrad, Bremerhaven, Tilbury and Le Havre to Montréal and back. In all the ship undertook nearly 40 such voyages between 1967 and 1971.