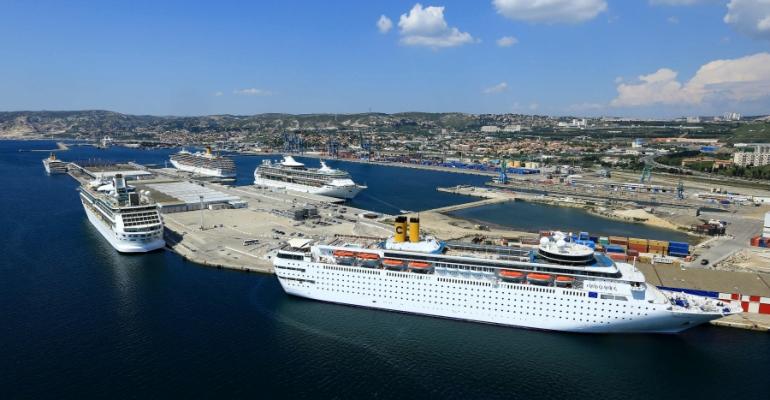 Marseille expecting to welcome 1.7m cruise visitors in 2016 (PHOTO: C MOIRENC)
Port of Marseille could enter the world’s Top 10 cruise ports this year by handling an anticipated 1.7m passengers from 510 ship calls, Marseille Provence Cruise Club announced during a promotional visit by a business delegation from the southern French city to London Thursday.

‘We’ve more than doubled our passenger traffic over the past five years, with a rise of 117%,’ Suhas said. ‘There’s no other major port in the world that has seen such growth.’

The MPCC president predicts the rapid growth rate will continue, with the port capable of ‘easily reaching 2.5m passengers annually in the next five years.’ This is thanks to Marseille’s much-improved tourist offer since its stint as European Capital of Culture in 2013, plus the timeless appeal of the Provence region and nearby cities such as Avignon, Aix-en-Provence and Arles, he says.

To help attract more lines to homeport at Marseille the city’s airport is investing half-a-billion euros over the next 10 years in upgrading its facilities to be able to receive more widebody aircraft,  in a bid to attract flights from North America. Currently MSC, Costa and Croisieres de France all interport at Marseille, but airlift is only from francophone countries in Europe such as Belgium, Switzerland and France.

‘We are rather confident of attracting transatlantic flights to Marseille,’ Aéroport Marseille Provence’s Romain Wino told Seatrade. ‘The city itself is booming, Provence is a mythical destination and the river cruise market on the Rhone is also one of Europe’s largest with 600,000 passengers annually, 11 vessels performing turnarounds in our region, so we can build a bridge between the two passenger bases, and this is very interesting for airlines.”

The port is already improving its marine infrastructure for visiting cruiseships by widening the access channel to Marseille Provence Cruise Terminal from 190mtr to 250mtr, due for completion next year.

Before then a huge new drydock facility for shiprepair is scheduled to open at the port this September, which will target cruiseships as well as other types of vessels for maintenance and repair work.