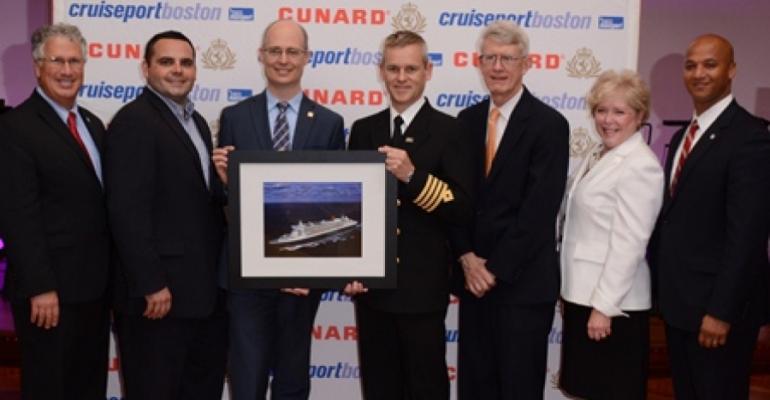 State, local and community leaders gathered in Boston on Wednesday to honor the 10th anniversary of Queen Mary 2 and commemorate the historic relationship between Cunard Line and the city as the company looks to its 175th anniversary in 2015. Boston was Cunard’s first US port of call when Britannia concluded its maiden trans-Atlantic voyage from Great Britain to North America in July 1840.

Noting Cruiseport Boston has had record-breaking passenger numbers the last two seasons, contributing to a $79.5m economic impact, Glynn said cruise operations would not be possible without the nearly 1,000 men and women working at the terminal. Queen Mary 2's presence represents the good blue-collar jobs that go hand in hand with 'this successful industry.'

Birge related a story about how the city saved Cunard from ruin in 1844 when Britannia was stuck in a frozen harbor. The mayor raised money and 1,500 people dug for three days to clear a 10-mile channel so the vessel could leave with its passengers.

'Boston has and will continue to hold a unique and significant place in Cunard's history,' Birge said.

Joining the festivities were several South Boston community members, many celebrating their wedding anniversaries of 50-plus years.