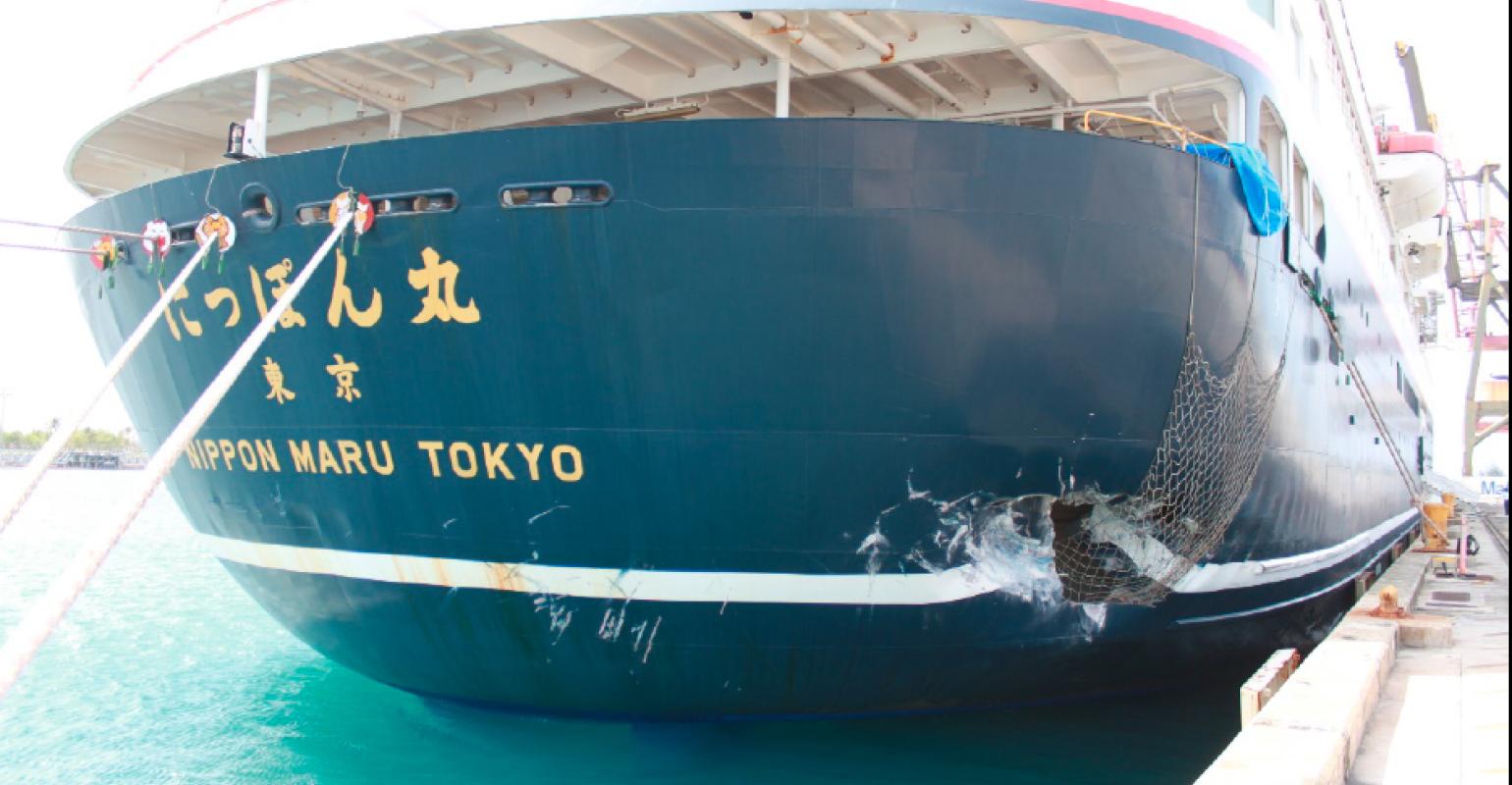 Damage to Nippon Maru was estimated at $456,080, while damage to the mooring dolphins was in excess of $500,000 PHOTO: US Coast Guard
The US National Transportation Safety Board determined that the probable cause of Nippon Maru’s contact with the mooring dolphins at the US Navy Wharf D in Apra Harbor, Guam, last December was alcohol impairment of the master while he conned the vessel, resulting in an errant astern engine input.

At 9:13 p.m. on Dec. 30, 2018, the stern of Nippon Maru struck mooring dolphins while the vessel was maneuvering in a turning basin after getting underway from the harbor’s commercial port. No pollution or injuries were reported.

The strike opened a large hole in the starboard side of Nippon Maru’s stern and a gash in the port side stern, damage that was estimated at $456,080. Both of the concrete dolphins at the D Wharf were damaged and a catwalk that spanned the gap between the dolphins was destroyed. Damage to the mooring dolphins was in excess of $500,000.

According to the NTSB’s Marine Accident Brief, the master stated that while he and the pilot attempted to pivot the vessel in the turning basin, he had mistakenly moved the joystick that controlled Nippon Maru’s engines and rudder to the astern position. Statements from the third officer and bridge wing VDR audio confirm the master moved the joystick astern, eventually moving it to full astern, and kept it there until after the vessel struck the mooring dolphins.

During this time, the third officer repeatedly alerted the captain and ultimately tried to take control of the joystick by moving it to the ahead position, but the master immediately moved it back.

The pilot stated that, as he prepared to leave the ship after the accident, he smelled alcohol on the master’s breath.

According to the Coast Guard report of mandatory chemical testing following a serious marine incident, the master had a positive alcohol screen about five hours after the accident, with a confirmatory positive breath alcohol test of 0.071 grams per deciliter. Per the Title 33 Code of Federal Regulations Part 95, an individual is under the influence of alcohol when operating a vessel with a blood alcohol concentration of 0.04% by weight (equivalent to 0.04 g/dL) or more.

Mitsui OSK policy for the Nippon Maru stated crew were required to abstain from drinking four hours before performing scheduled duties and keep alcohol levels at less than 0.03 g/dL while on duty.

The NTSB report noted that because the breathalyzer test was conducted five hours after the incident, it is possible the master’s blood alcohol concentration was the result of additional alcohol consumed after the accident.

However, his errors in maneuvering were not consistent with his level of skill and experience, particularly his experience with this vessel in this harbor, and ‘suggest that he was impaired during the vessel’s voyage,’ the NTSB concluded.