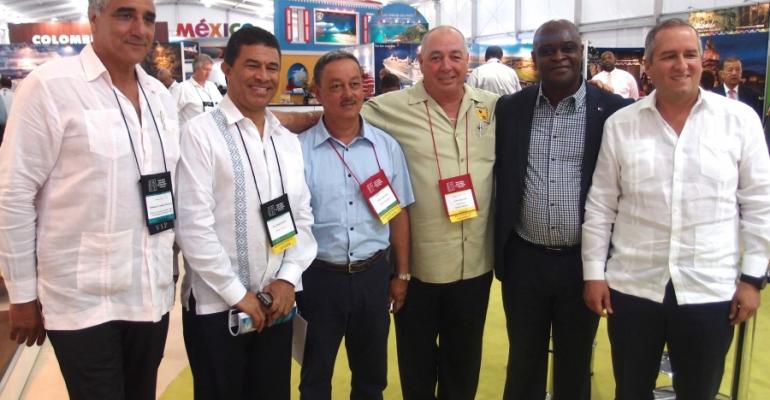 Ahead of Banana Coast's first mega-ship call, Norwegian Jewel on Wednesday, the mayor of Trujillo, Honduras, expressed his enthusiasm for cruise tourism and what his city can offer visitors.

Mayor José Lainez stressed Trujillo's authenticity, history and multicultural aspects, and the friendliness and hospitality of its people.

Christopher Columbus landed in 1502 and the town was settled by conquistadors under Hernán Cortés. There is a Spanish fort and colonial architecture. Local cultures include the Pech and Miskito Indians and the Afro-Caribbean Garifuna. Natural beauty abounds in the form of beaches, a bank of starfish that Lainez called unique in the world, mountains, waterfalls, thermal springs and a lagoon with mangroves that's a haven for wildlife.

'We have everything for Trujillo to be a 12-month destination,' he summed up. Twenty-nine ship calls are scheduled during Banana Coast's inaugural winter 2014/15 season.

The mayor spoke to Seatrade Insider at the Florida-Caribbean Cruise Association conference in St. Maarten last week, where he was part of a Honduras delegation that included Vice President Ricardo Alvarez. Banana Coast, developed by Randy Jorgensen, general manager of Grande Trujillo Autoridad, and Access Cruise's Shannon McKee, who created the shore excursion program and is a partner and investor in the port, exhibited in the FCCA trade show.

Lainez said the event had been very valuable.

'We are here to learn. We picked up some things we hadn't thought of. We want to know exactly what the customer wants, and the cruise lines are our customers.'

He added that tourism is vital to Trujillo and generates employment that improves residents' lives. At the same time, it's a challenging business and destinations have to be ready to meet the demands of today's tourists.

For Norwegian Jewel's arrival, there will be an official welcome ceremony, and cultural performances and handicrafts both at the terminal and in Trujillo's central plaza.

In addition to Norwegian Cruise Line, half a dozen brands including Holland America, Silversea, P&O Cruises and Oceania Cruises have scheduled 29 calls on eight ships from now through the first quarter of 2015.