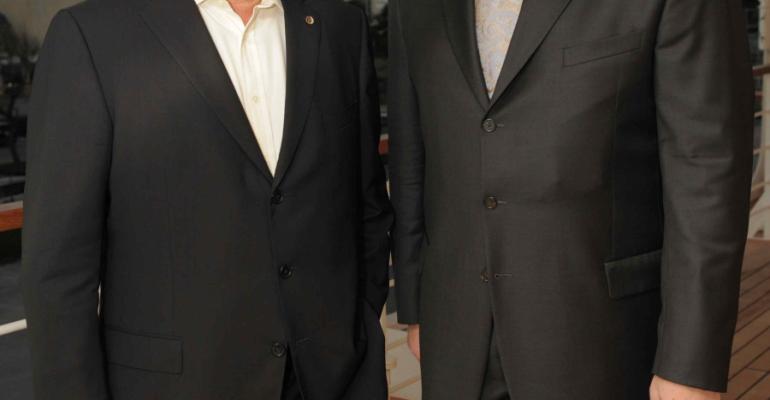 Rick Meadows is 'uniquely qualified' to lead both Seabourn and Cunard North America, according to Alex Sharpe, president and ceo of Signature Travel Network. He cited Meadows' 'great experience with luxury brands' and his knowledge of how Holland America Line and Princess Cruises are interrelated, integral since the sales teams are 'his troops on the ground,' responsible for carrying the brand messages to travel agents.

'Rick has a great opportunity with Cunard,' Sharpe added. He thinks the brand 'needs a bit of a facelift' in North America and more relevance for agents stateside.

'With Rick’s background and reputation, he will bring relevancy at the outset, but I believe the biggest opportunity is to remake the brand and help agents understand where it fits within their portfolio,' Sharpe said.

Over the next month or two, Meadows is winding down as HAL's long-time evp marketing, sales and guest programs, and handing over his direct reports to new president Orlando Ashford. Nobody is replacing Meadows since the line's structure has changed.

In an interview with Seatrade Insider, he expressed pride in being one of the individuals at the heart of the Signature of Excellence initiative, a 'transformative process' that started when he began at HAL. Elements included the relationships with Food & Wine magazine for the shipboard Culinary Arts Centers, The New York Times' involvement in the Explorations Cafes and Microsoft's Digital Workshops. Forming the Culinary Arts Council in cooperation with the hotel operations team and master chef Rudi Sodamin has been 'a lot of fun.'

Ship inaugurals with godmothers like Queen Beatrix and former Princess (now Queen) Máxima of the Netherlands and 'the chance to see some beautiful new ships become a commercial success' have been other highlights.

'Seabourn and Cunard are very different brands. It's important each has its own dedicated team,' Meadows said, adding that he looks forward to bridging his experience with Seabourn's small ship luxury and Cunard with its luxury on a grand scale. His goal for Cunard is to increase consumer awareness and broaden the base of North American travel agents who sell the brand.

Considering all the changes in reporting structure and leadership over the years, sometimes it has seemed as though Carnival Corp. & plc doesn't know what to do with Cunard. Meadows said change often springs from opportunity, adding his assurance that Carnival is committed to the line that marks its 175th anniversary in 2015.

'I'm confident in Carnival Corporation's support of Cunard as a brand,' he said, citing Micky Arison's vision to create a trans-Atlantic super-liner, Queen Mary 2, and build Queen Victoria and Queen Elizabeth. Cunard has 'a very young and robust fleet' and a 'powerful legacy ... It's such a powerful and iconic brand,' Meadows said. He'll be involved in many of the 175th anniversary cruises and events.

Meadows believes Cunard fields a 'terrific team.' After 29 years in the Carnival group, he knows Stanley Birge well and thinks he does 'a great job,' while Nina Kass, vp customer service, has 'a wealth of history and experience.' Meadows spent time with the Princess/Cunard sales team at their national meeting and was impressed with their passion for Cunard and their desire to find more agent partners.

He said expanding the agent base will come by listening to agents and making sure they have the right tools and training, especially important for the more junior agents.

When Meadows was svp of Seabourn from 2001 to 2004, the line shared an office and a number of support services with Cunard at Miami's Blue Lagoon Drive. This was the period when Cunard was planning Queen Mary 2 and Meadows, as part of the management committee, participated in the development meetings and sailed on the liner during its inaugural activities.

So he's familiar with Cunard, but still studying and learning about it, and he plans to cruise on another of its vessels in February. Already he's extolling the 'highly personalized service, elegant style and timeless values.'

What intrigues Meadows most is the renaissance of the Cunard brand over the last 10 years. 'We're one of the youngest fleets in the industry and one of the oldest names in cruising in general. It's interesting to tie the legacy of the golden age of ocean travel to where we are today,' he said.

He's excited about how the essence of the brand fits into today's world, and delivering it in a relevant way—echoing Signature Travel's Sharpe's points.

Seabourn, meanwhile, is in 'an exciting period of growth. Having two ships under contract is very energizing. These two ships will be very special,' Meadows said. 'They are going to be incredible ultra-luxury—all veranda, all suite, very thoughtfully purpose-built off the highly successful platform of the Odyssey-class ships.'

Working with hospitality design icon Adam Tihany, the architect, is a pleasure for Meadows, who loves their brainstorming sessions: 'He's such a visionary. He has his finger on the pulse of hospitality design ... He's very good at seeing trends and understanding what's happening. It gives his design a sense of being valid and extraordinarily current.'

The ships will keep the most popular aspects of the Odyssey-class trio, such as Seabourn Square. They are slightly larger, giving additional space for some new concepts.

More will be revealed in the coming months, Meadows said.