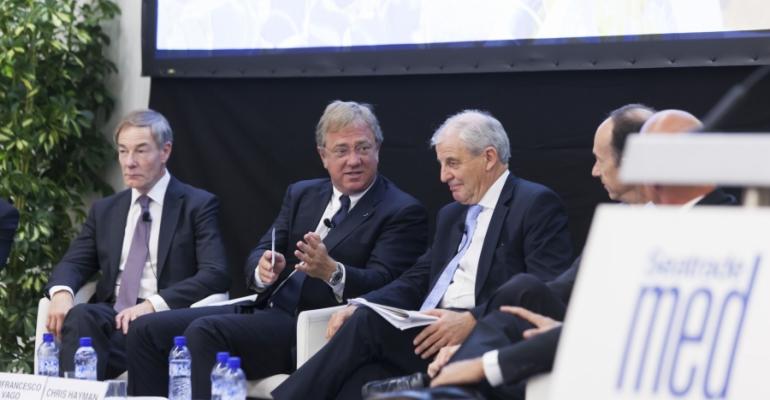 The good news: the Mediterranean market is recovering from economic issues, with even hard-hit Spain turning the corner, and key ports like Barcelona with its current Oasis of the Seas mini-season are proving they can handle cruising's largest new ships. On the downside, infrastructure is uneven, geopolitical issues dog certain regions, taxation and regulations pose challenges and many European governments fail to appreciate cruising as an engine for economic growth and jobs.

So said cruise line leaders during the opening State of the Cruise Industry in the Mediterranean session at Seatrade Med in Barcelona.

The fact that Europe has been able to boost demand for cruises by a hefty 43% since the global recession hit in 2008—when other tourism sectors were flat—shows its resilience, said MSC Cruises executive chairman Pierfrancesco Vago in his role as CLIA Europe chairman. Last year a record 6.4m Europeans cruised, a 4% increase over 2012, and Europe's appeal as a destination drew 1m people from overseas to cruise in continental waters.

'I'm starting to feel good for the first time about all the European markets as a whole,' said David Dingle, newly appointed chairman of Carnival UK and vice chairman of CLIA Europe. In Spain, the economic situation has bottomed and there are signs of growth, while the strong passenger volumes in France are encouraging.

'We do have to work harder to get the business,' Dingle added.

Though pricing may have suffered, cruising became even more attractive during recessionary times, according to Kyriakos (Kerry) Anastassiadis, ceo of Louis Cruises. And, concerning destinations, he said 'Greece has really come back strongly,' with close to 2m total tourists.

'For the next two to three years there will be continued demand for the Eastern Mediterranean, particularly Greece and Turkey,' Anastassiadis predicted.

For ports, 2013 broke all Mediterranean records, with 24% growth and 27m passenger movements, noted MedCruise president Stavros Hatzakos. And what he called 'the China effect' isn't a challenge but instead an opportunity to bring more tourists to the region, he told Seatrade Med delegates.

The fact that some key ports are expanding in line with cruise growth is exemplified by Barcelona—Europe's leading homeport and the fourth busiest cruise port globally—which successfully handled its first Oasis of the Seas turnaround last weekend when a record 58,000 passengers went through the port.

'To go as smoothly as it did on the first call is a great accomplishment and a good symbol,' said Adam Goldstein, president and coo of Royal Caribbean Cruises Ltd. The symbolic importance is that 'we're able to bring larger ships here,' he added. Services are adequate, it's possible to create a range of itineraries and cruisers are satisfied.

Yet 'many Mediterranean port facilities are falling behind cruise growth and urgent upgrades are needed,' Vago warned.

Port associations are vital, however they need to work closely with CLIA and as 'one voice' on regulatory matters, Vago stated. CLIA provides a lot of data that can benefit ports though costs need to be shared, he said.

Concerning deployment, the region has an uneven profile. Of last year's 27m passenger movements, 19m were in the Western Med, 5m in the Adriatic and 3m in the Eastern Med, pointed out Seatrade chairman Chris Hayman, the conference moderator.

Responding to a question about whether the Western Med is 'full,' the panel's newcomer to the cruise industry, airline industry veteran Jorge Vilches, president and ceo of Pullmantur, disagreed. 'The Western Med and the Med itself have tremendous growth potential,' he said, adding that many of the most desirable cultural and historic places to visit are in the region, not to mention Europe providing an enormous source market that outsizes the US.

The business will grow—and Pullmantur itself will grow in 2016 with an additional ship, Vilches said.

In Goldstein's view, the Eastern Med has the opportunity to pick up share, depending on how destinations respond and the geopolitical environment.

For the UK market, Dingle said the Eastern Med probably has 'more intrinsic interest' since many Britons have already visited the Western Med. Political conflicts in the Black Sea area date back centuries and are 'a fact of life we just live with,' he added. Tougher issues are faced in the Levant—a pity, he said, because that region is critical to growing year-round cruise business in the Mediterranean.

The executives cited the need to further develop winter cruising in Europe. But if that's to happen, destinations have to be open for business. Anastassiadis said a way to encourage that would be to gradually extend deployment by a few weeks each season.

And Vago urged ports to consider reduced off-peak tariffs as a way to help cruise lines foster what is still a developmental concept.