MedCruise at 20: All the president's men and a lady 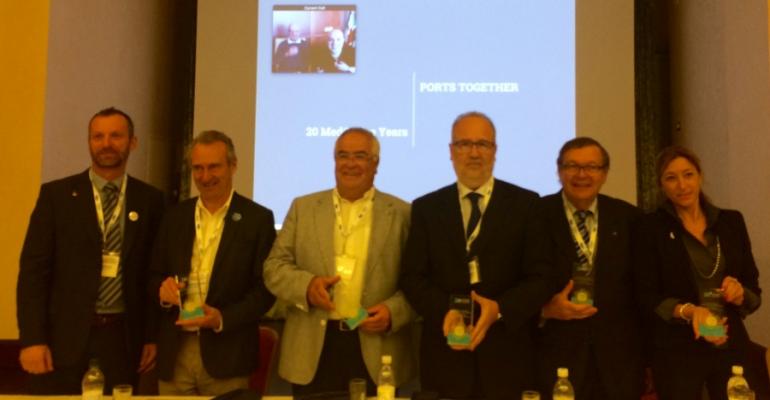 L-R: Pavic, Monsaingeon, Madrid, Hatzakos, Spadoni, Salvado and Cappocaccia on screen via skype
Past presidents and the current head of MedCruise gathered in Odessa this week to celebrate the association of Mediterranean ports' 20th anniversary during its 48th general assembly.

Fabio Capocacchia, president between 1997-2002, was unable to be present but joined from Olbia via skype during a holiday break. Joe Grioli, founding president from Malta, who is no longer in the industry, sent his best wishes in a letter.

Kristijan Pavic who took the helm this year told members when the association was founded he was a maritime faculty student. 'Later, when I was involved in managing a cruise port and become active in the life of the association, I realised how important MedCruise is for our ports.' He called the last 20 years 'a long journey putting the Med at the centre of the world where it historically belongs.'

In those 20 years, the number of ports has grown from 15 (from 13 founding members) to over 100 and the number of passenger movements within the basin and its adjoining seas has risen from 2.5m to 27.4m.

Capocacchia, then representing Genoa port, told how he started to talk to Seatrade chairman Chris Hayman in 1995 about organising a cruise event focussing just on the Med and about forming a regional association of ports to help grow awareness with the cruise lines. The first Seatrade Med took place in Genoa in 1996 and just prior to that MedCruise was founded in Rome on June 11, the same year.

During Capocacchia's time at the helm, membership rose to 67 ports and cruising activity in the Med doubled.

Barcelona's Juan Madrid was president from 2002-2005 where he championed the development of more ports, more varied shore excursions and the extension of the season to year-round cruising.

The presidency then switched to France with French Riviera's Laurent Monsaingeon steered the association between 2006-2009, a period when he encouraged smaller ports to join and learn best practices from the marquee ports. He also started an associate membership scheme. 'We also tackled issues that we knew were important to the cruise lines such as port and destination congestion and berthing allocations before they became bigger problems.'

The presidency returned to Italy when Livorno's Giovanni Spadoni took over between 2009-2011. 'It was a time to encourage an expansion of membership to the seas adjoining the Med and also to try and tempt some of the founding members to come back which we achieved,' he told the Odessa GA.

In 2011, the presidency and secretariat moved to Greece under Piraeus' Stavros Hatzakos charge to 2014. 'We have had a great journey so far and we can go further rising from the second most popular destination to the first,' he stated. During his time in office, Hatzakos encouraged the association to grow its voice in Brussels and its partnership with CLIA and focus on the areas where ports needed to improve.

The leadership returned to Barcelona in 2014-15 when Carla Salvado took the helm, althought the secretariat, under Thanos Pallis, remained in Piraeus where it continues today. Salvado said, 'I grew professionally with MedCruise starting in 2003 as secretary general, then as a member of the board and had the honour to lead the Association for a short but challenging period of time.'

Salvado saw that cruising in the Med was facing challenges from outside such as ships moving to Asia. 'It was a time to open our minds to encourage those source markets to consider a cruise in the Med as a natural step after tasting the product locally.'

As well as leading delegations, attending events and sponsoring travel agent training in Asia, Salvado pushed for promotional literature in Chinese and Korean language to spread the Med's offering. Closer to home, MedCruise established travel agent training programmes, together with CLIA, for agents in Spain and France focussing on the Med as a destination.

Pavic and his predecessors cut a special 20th anniversary birthday cake at the closing gala dinner last night which was shared out. He thanked the 100 plus participants for 'making your way to Odessa and supporting a member who is having a difficult time.' He added, 'that is what being part of a big family is all about and I believe we all have a bright future.'