MedCruise GA, Odessa: Black Sea cruising down but will return 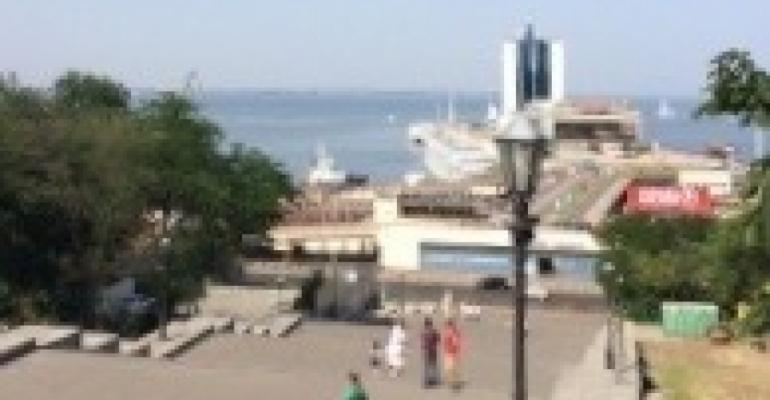 The prospects for Black Sea cruising came under the spotlight at the 48th MedCruise General Assembly taking place in Odessa.

Odessa Port Authority's general manager Mikhail Sokolov lamented the port's current lose of business due to the events in Crimea and surrounding countries. 'We have had just one cruise call this year (Europa 2 in May) and hope to see just six more in 2016,' he explained.

'We are hoping with a return to political and economic stability in the region we will see again see the 120 calls annually that we had in the past,' he remarked.

He stressed, 'we are continuing to maintain our port and city infrastructure in the hope we will get cruise ships returning in the future.'

He also thanked MedCruise president Kritijan Pavic for bringing the GA to the city and 'to the 100 plus members who have made their way here to experience the reality of this peaceful city.'

Holland America Group's Bruce Krumrine, who has visited Odessa a few times called it 'one of the most beautiful European cities with tree-lined streets, culture, historic and well-preserved buildings, opera and art'.

Princess has been calling in the Black Sea throughout the whole of Krumrine's 35 years with the company, he said.

'It offers lots of content and history' and referred to it as, 'a thinking guest's destination'.

However it is included on very few itineraries currently, 'due to the perceived instability in the region, coupled with the present concerns about visiting Istanbul (the usual start point for Black Sea itineraries) which is very disappointing.'

Pavic, who represents the Port of Dubrovnik commented, 'history tells us we have seen other areas in our region overcome difficulties and I have no doubt Odessa and the Black Sea will be back on itineraries one day.'

Krumrine did give some hope for the future by saying guests are not telling us they don't want to go to the Black Sea, but not today.

'We anticpate more pent up demand having the reduced capacity in the region and offered a vote of confidence to Odessa and the Black Sea.

Teodor Patrichi from Constantza Port in Romania which has around ten calls this year warned that the drop in cruise ships visiting the region may have a negative effect on tourist infrastructure investment such as buses and guides.

Adam Sharp, Royal Caribbean Cruises Ltd, on a second visit to Odessa, was impressed with the city and its atmosphere: 'Walking around we can feel and see it is a vibrant city with young people and families out on the streets enjoying the summer weather and it a real shame it is not currently on the cruise map'.

He said Istanbul as the hub is the key to restoring cruise traffic back into the Balck Sea.

Krumrine and Sharp agreed 2018 would be the earliest date for a return to past numbers.

MedCruise is celebrating its 20th anniversary this year during the 48th GA being held in Odessa, Ukraine. The association numbered 15 ports hosting 2.5m passengers in 1996, today the membership counts over 100 port members, 34 associates and welcomed 27.4m passenger movements in 2015.