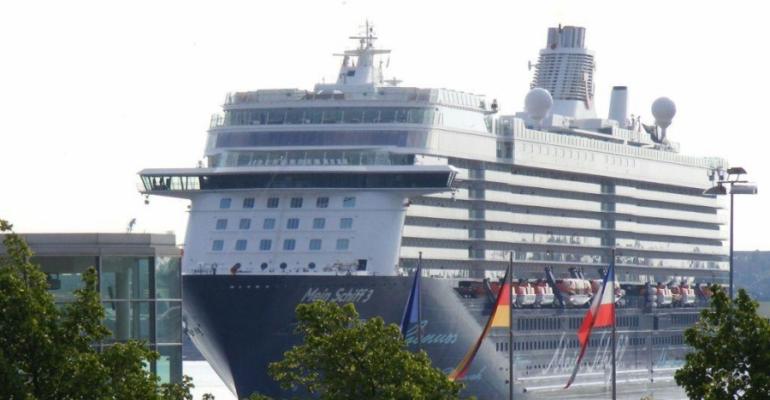 Mein Schiff 3, recently delivered to TUI Cruises and scheduled to be named in Hamburg on June 12, called at Kiel for the first time on Wednesday as part of a series of familiarization visits for the trade who are getting to see features like the ship's sea life exhibition.

Mein Schiff 3 docked at Ostseekai, where numerous spectators were on hand. A plaque and key ceremony was held on board with Robert Vollborn, first deputy chairman of the Kiel Town Council, and Dirk Claus, md, Port of Kiel, presenting plaques to the ship. TUI Cruises was represented by ceo Richard Vogel and Capt. Kjell Holm.

Kiel is receiving the three ships of TUI Cruises for a total of 18 calls this summer. Next year, the north German city will become the base port for Mein Schiff 4, TUI Cruises' second purpose-built cruise ship, under construction at STX Finland.

The 294-meter Mein Schiff 3 was scheduled to depart Kiel Wednesday evening for a two-day Baltic cruise to Rønne on Denmark's Bornholm Island. The ship is due to return on Friday for an overnight stay. An 'exploration day' will take place on Saturday prior to another familiarization cruise to Danish waters.

Eventually, Mein Schiff 3 is to return to Hamburg for the christening. Meanwhile, the short cruises are showing off the ship to travel agents.

Among other innovations, Mein Schiff 3 features a 300-square-metre exhibition space jointly conceived by TUI Cruises and the International Maritime Museum of Hamburg, with support from several partners, including renowned German universities and research centres. Called 'Meerleben' (an invented word that means 'life at sea' and 'more life'), the exhibition presents a realistic model of a blue whale, an interactive globe, ship models and sea life samples from scientific expeditions.

Also on display is the model of Mein Schiff 3 used for wind tunnel testing during the vessel's construction.