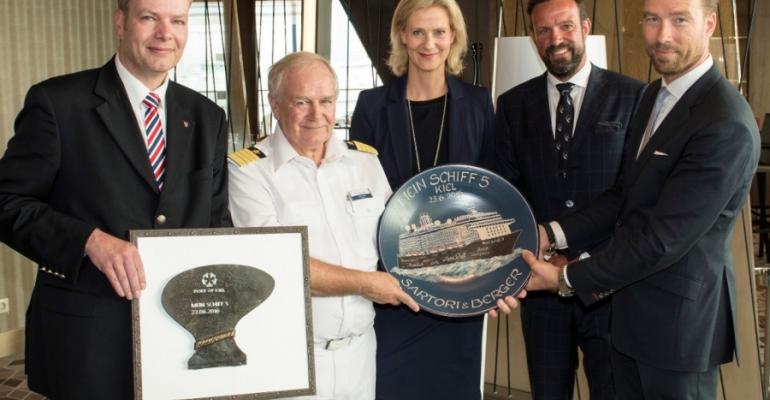 TUI Cruises' newbuilds scheduled for delivery by Meyer Turku in 2018 and 2019 will enter service as Mein Schiff 1 and 2. Previously they were designated Mein Schiff 7 and 8, but the existing 1 and 2 are going to Thomson Cruises within the TUI Group.

This means TUI Cruises will have a fleet numbered Mein Schiff 1 to Mein Schiff 6 in 2019, with all units of the same standard and purpose-built for their operator. Mein Schiff 1 and Mein Schiff 2 were originally Celebrity Cruises vessels.

TUI Cruises ceo Wybcke Meier announced the news during a plaque exchange ceremony aboard the recently delivered Mein Schiff 5 on Thursday at the Port of Kiel.

Meier also highlighted the close ties between TUI Cruises and Kiel, noting that both the current Mein Schiff 1 and Mein Schiff 2 started their career with TUI in the port. And last year Kiel served as the venue for Mein Schiff 4's naming.

Mein Schiff 5's naming will also begin in Kiel. At 3 p.m. July 15, the ship will sail from Kiel bound for Travemünde, where the ceremony will take place off the beach between 10:30 p.m. and 11 p.m. After that, Mein Schiff 5 returns to Kiel, scheduled to dock at 7 a.m. July 16. This short naming voyage is fully booked.