Memory artist creates montage of cityscapes for Harmony of the Seas 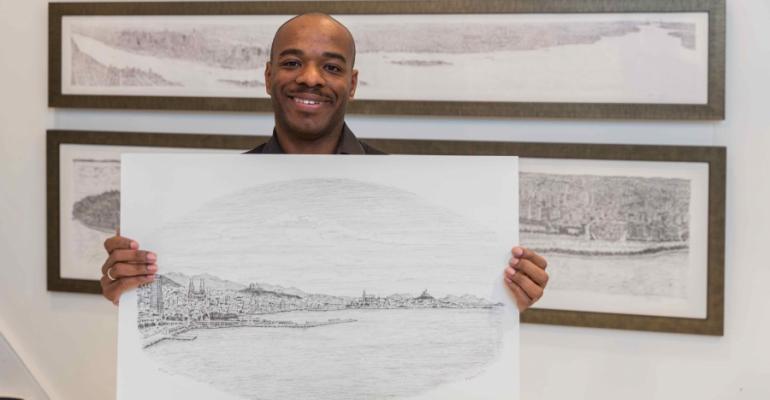 Stephen Wiltshire shows his montage of three cityscapes, all ports to be visited by Harmony of the Seas

Harmony of the Seas will display a drawing created from memory by distinguished British artist Stephen Wiltshire MBE.

It captures Barcelona, Palma de Mallorca and Marseille—three of the ports for Harmony of the Seas' inaugural Mediterranean season in 2016.

Wiltshire committed these views to memory during a cruise, his first, on Allure of the Seas in October. He said the whole experience and range of activities on board took him by surprise.

With his ability to sketch entire cityscapes from memory, Wiltshire merged the three cities into one seamless coastal montage, which includes landmarks such as Barcelona's Sagrada Familia, Palma de Mallorca's Castillo da Bellver and Marseille's neo-Byzantine cathedral. After committing each scene to memory by carefully scanning the coastline, the artist returned to his London studio weeks later where he sketched the panoramic view with accuracy.

'We wanted to capture something truly extraordinary that reflects the ultimate views people will experience on board Harmony and the best destinations they can explore off the ship, too,' said Stuart Leven, managing director of Royal Caribbean UK & Ireland.

Harmony of the Seas is to enter service in May. Thirty-four western Mediterranean cruises are scheduled from June 7.