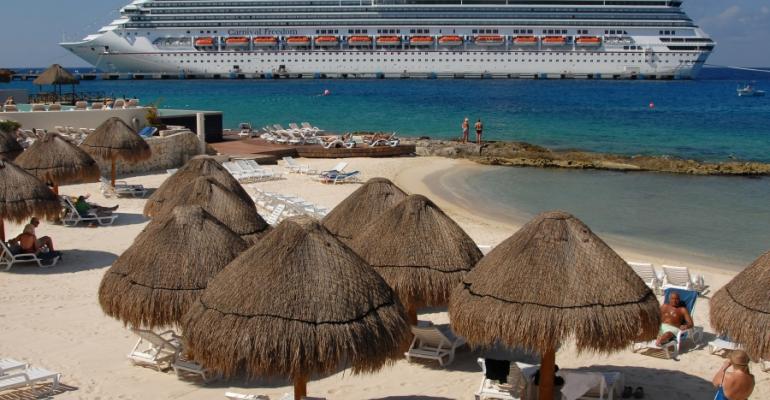 The ship was waiting off the coast until noon eastern time before taking the decision to proceed to its Galveston homeport, to ensure on-time arrival Sunday morning.

'We greatly regret that this situation, which was completely beyond our control, precluded the ship from making its scheduled visit to Cozumel and the resulting disappointment it has caused our guests,' Carnival Cruise Lines said in a statement.

Carnival reiterated that the Texas healthcare worker on board continues to show no symptoms of illness and poses no risk to the guests or crew. The woman and a traveling companion remain in voluntary isolation.

Carnival is issuing passengers a $200 per person credit to their shipboard accounts and a 50% discount on a future cruise based on the missed visit to Cozumel.

Carnival Magic passengers were allowed to go ashore in Belize City on Thursday, though the two voluntarily quarantined people remained on board.

The hospital worker, a supervisor in the Dallas laboratory where Ebola samples were tested, sailed from Galveston Oct. 12, before the US Centers for Disease Control and Prevention's updated requirements for active monitoring. At the time she left the country, CDC required only self-monitoring.

According to the US Department of State, the woman has shown no signs of fever or illness and it has been 19 days since she 'may have processed' fluid samples from Thomas Eric Duncan, who died at Texas Health Presbyterian Hospital.

Symptoms may appear up to 21 days after exposure to Ebola, but the average is eight to 10 days, according to the US Centers for Disease Control and Prevention.

'The employee has been self-monitoring, including daily temperature checks, since October 6, and has not had a fever or demonstrated any symptoms of illness,' the State Department said.

She was also examined by Carnival Magic's shipboard doctor and reported healthy.