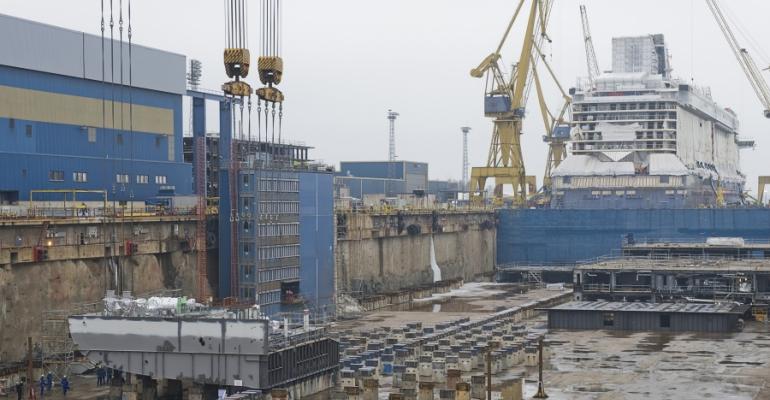 Meyer takes a 70% stake in a share purchase with the Finnish government agreed with STX Europe, the owner of the Turku yard.

Some 1,300 employees and a specialised supplier network are currently working on Mein Schiff 4 for TUI Cruises, which has just ordered a pair of additional newbuilds in Turku.

TUI Cruises ceo Richard Vogel expressed his satisfaction over the positive outcome of the negotiations between STX and Meyer Werft.

'This ensures TUI Cruises keeps the valuable know-how of the shipyard and lays the foundation for the successful expansion of TUI Cruises to a new level,' he said.

'This acquisition will strengthen the yards in Papenburg, Turku and Rostock,' according to Jan Meyer, managing partner of Meyer Werft. 'By joining forces with Turku we can offer more flexibility to our customers.' In addition, he said, both builders respect each other's high level of professionalism and can learn a lot from each other to improve their working processes. They also can join forces on research and development.

'We are confident that in this way we can create a good opportunity for the Finnish maritime cluster to thrive and also hope to interest many young people to join us for building the future high-tech ships,' Meyer said.

The acquisition is subject to clearance by antitrust authorities and banks.

The sale of STX Finland had been expected for months after the main creditor for Korea's troubled STX Group, Korea Development Bank, confirmed the plan to sell STX Europe, which includes the STX Finland and STX France shipyards, by June.

The STX Group acquired Europe's largest shipbuilding company, Aker Yards, in 2008. That year alone, the group was due to deliver nine cruise vessels, 28 offshore and other specialized vessels, and two chemical tankers.

Since then, the offshore business has been sold to Fincantieri and cruise ship orders have slowed. Plus, STX Group was hard hit by the global slowdown in commercial shipping. Last October, Korea Development Bank announced the intention to sell STX Europe as part of a debt-reduction strategy.

Meyer Werft's acquisition of STX Finland's Turku yard secures the future for a facility that has been a leader in cruise ship production. Among its vast credits are innovative ships like Oasis of the Seas and Allure of the Seas.

Until the TUI double-ship order, the Mein Schiff 4 delivery in 2015 would have wrapped up the yard's cruise orderbook.

At privately held Meyer Werft in Papenburg, the cruise orderbook consists of Quantum of the Seas for delivery this year, sister Anthem of the Seas and Breakaway-plus ship Norwegian Escape in 2015, Quantum 3 and a 150,000gt newbuild for Star Cruises in 2016, a Star Cruises sister vessel and Norwegian Bliss in 2017, and an additional Breakaway-plus newbuild in 2018 and 2019.