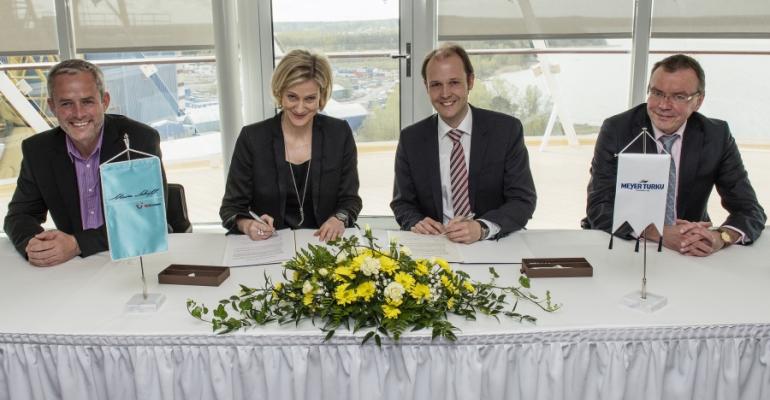 'Our expansion is advancing in leaps and bounds thanks to the perfect coordination between the shipyard, our construction team and all companies involved. We are highly satisfied and delighted at this new addition to our fleet,' said Wybcke Meier, ceo of TUI Cruises.

Jan Meyer, ceo of Meyer Turku, thanked the yard and subcontractors and TUI Cruises for 'the great cooperation which enabled us together to create this sophisticated cruise ship which is comparable to a complex travelling city.' He continued: 'Now that Turku yard is a 100% family company this makes me even more proud. Our passion for shipbuilding drives us to success with a long-term view. We value our history but we know that we have to constantly reinvent ourselves.'

Special highlights are the sea-and-sky suites over two decks, which feature their own 29sq mtr roof terrace.

Designed for the German premium-class cruise market, Mein Schiff cruise ships have been constructed using advanced and eco-friendly technologies with energy consumption around 30% lower than for other cruise ships of the same size. By using the combined exhaust after-treatment system consisting of a scrubber and a catalyzer, sulfur emissions are lowered by as much as 99% and nitrogen oxide emission are reduced by around 75%, Meyer Turku said.

Mein Schiff 4 will be named in Kiel on June 5, before sailing on her maiden voyage to the Baltic states on June 6.