Meyer Turku floats out Mein Schiff 5, ship to be named at Lübeck 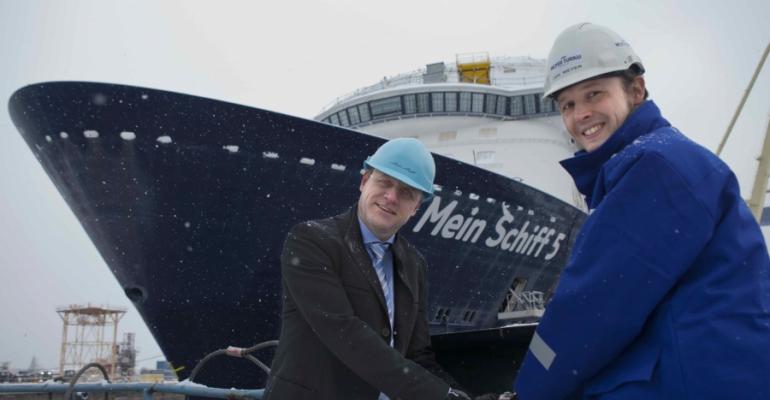 TUI Cruises' Ferdinand Strohmeier, left, and Meyer Turku's Jan Meyer open the buklheads to flood the dock on a bitterly cold day
Meyer Turku Oy floated out the first vessel to have been contracted and built totally under the ownership of the Meyer family. Mein Schiff 5 is a sister of Mein Schiff 4, handed over to its owner last spring.

On hand for the float-out were Ferdinand Strohmeier, vp operations for TUI Cruises, and Jan Meyer, head of the shipyard, as well as members of the project team. Strohmeier and Meyer opened the bulkheads to flood the drydock and the water flowed despite the bitter cold of -12 degrees C.

In the next hours the dock will fill with 300m liters of seawater, then Mein Schiff 5 will be towed to the outfitting pier.

Though this is TUI Cruises' third newbuild, it is still a long way from becoming routine, Strohmeier said, adding that it's always a great feeling seeing a ship float for the first time.

The launch took place six months to the day ahead of Mein Schiff 5's scheduled naming festivities at Lübeck Bay near Travemünde on July 15.

It has been a short, 14-month construction period, and now the focus turns to outfitting the interiors and exteriors of the 99,500gt vessel. It has 2,534 lower berths.

A total of 1,500 workers are involved in the construction, which is 72% complete—right on schedule.

Jan Meyer expressed his confidence that the yard would be able to deliver TUI Cruises 'a wonderful new cruise ship' on the agreed schedule.

After its naming ceremony, Mein Schiff 5's maiden voyage will take place from July 16-24. Sailing round-trip Kiel, the cruise will visit Tallinn, St. Petersburg, Helsinki and Stockholm. The ship will spend summer operating varied voyages to the Baltic, northern Europe, Norway and western Europe. The Caribbean is in the charts for the winter.