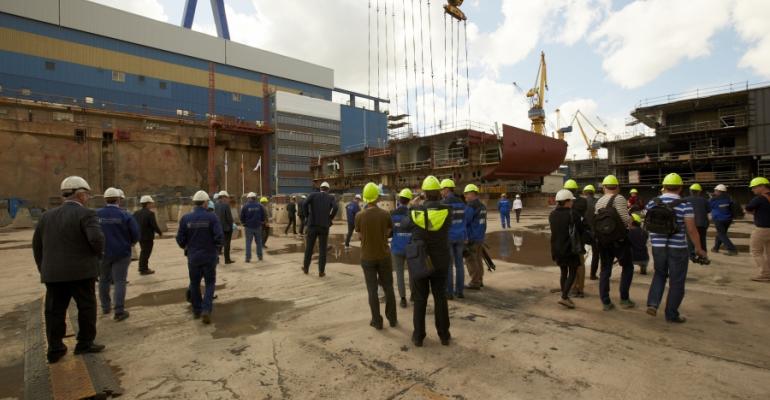 The first keel block for Mein Schiff 5 moves into place

Today in Finland, the keel-laying for Mein Schiff 5 took place at Meyer Turku shipyard's drydock, whilst in the construction hall, the first steel was cut for sister ship Mein Schiff 6.

Some 90% of the cabins have ocean views and 82% have a balcony. Both ships are being constructed using innovative and environmentally-friendly technologies. They are especially energy-efficient and consume around 30% less energy than comparable cruise ships. Thanks to the advanced exhaust cleaning system that uses a scrubber and catalytic converter, sulphur emissions can be reduced by approximately 99% and nitrogen oxide emissions by around 75%.

'This growth presents us with the opportunity to further strengthen our position with one of the most modern fleets on the German market. With six ships in the medium term, we are aiming at a market share in excess of 25%,' Meier said.

'The construction of a ship is for the shipyard a great team effort in which we work closely with our customers and subcontractors. It is a nice tradition that we pause and appreciate the moment when the hardware part of the construction of a new ship is actually starting – as for Mein Schiff 6 today. We are also happy that we are on schedule with Mein Schiff 5 and can celebrate the keel-laying for Mein Schiff 5 as planned,' said Jan Meyer, ceo of Meyer Turku Oy.