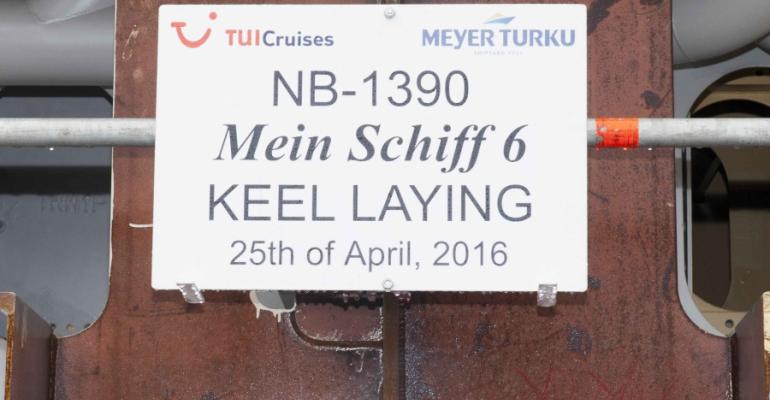 Mein Schiff 6 will be the fourth vessel built in Turku for TUI Cruises (Photo: Meyer Turku)

The assembly of TUI Cruises' Mein Schiff 6 began Monday at Meyer Turku shipyard with the first grand block laid in the building dock. When delivered in 2017, this will be the fourth vessel built in Turku for the German brand.

TUI Cruises ceo Wybke Meier, on hand for the keel-laying, noted that Mein Schiff 5 is just a couple weeks away from delivery. She thanked the shipyard for a successful cooperation.

According to tradition, coins were placed under the keel block to bring luck for Mein Schiff 6. Representatives of Royal Caribbean Cruises Ltd., Meyer Turku and the classification society Det Norske Veritas joined the event.

Mein Schiff 6 will stretch 294 meters, rise 15 decks and have capacity for approximately 2,534 passengers. Some 90% of the cabins have ocean views and 82% have a balcony.

In addition, Mein Schiff 6 features a number of improvements in energy efficiency and passenger amenities, even over sister ships Mein Schiff 3, 4 and 5. Thanks to the advanced exhaust cleaning system that uses a scrubber and catalytic converter, sulphur emissions can be reduced by approximately 99% and nitrogen oxide emissions by around 75%.

Meyer Turku ceo Jan Meyer noted it now will take only take seven months until the ship is fully assembled from its grand blocks. Then further outfitting, commissioning and testing will take place.