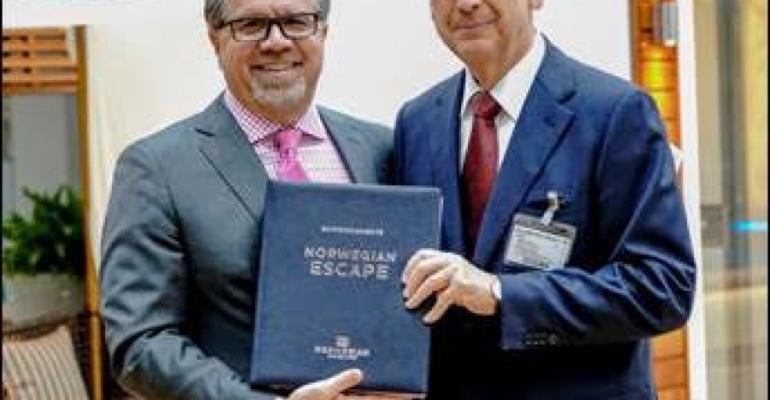 During a ceremony in Bremerhaven, Germany, after a building period of only 18 months, Norwegian Escape was signed over to Frank Del Rio, ceo of Norwegian Cruise Line Holdings, by Meyer Werft managing partner Bernard Meyer.

'Once again, the team at Meyer Werft, along with our newbuild and operations teams, and all of the ship’s officers and crew, have done a remarkable job and we cannot wait to welcome guests on board this spectacular new vessel,' Norwegian Cruise Line president Andy Stuart said.

For his part, Bernard Meyer said the builder was thrilled to deliver the first in the Breakaway Plus series and expressed pride in the team that 'worked diligently to design and build her.'

Three more Breakaway Plus ships are to be built at the Papenburg yard, including one for delivery in 2017 that is designed for the Chinese market.

Fifteen restaurants and eight bars and lounges, including the first Jimmy Buffet's Margaritaville at sea and two venues by James Beard Award-Winning Iron Chef José Garces, are among the features. A massive water park with multiple slides and a three-story ropes course are some of the many outdoor activities.

Two Tony Award-winning Broadway musicals will headline in the Escape Theater. 'After Midnight' combines the big-band songs of Duke Ellington and the hottest dancing from Broadway, while 'Million Dollar Quartet' is inspired by the famous one-time recording session that brought together Elvis Presley, Johnny Cash, Jerry Lee Lewis and Carl Perkins.

The ship sports Norwegian's largest Haven suites complex, arranged around a three-story covered courtyard. An expanded forward sun deck with a cantilevered whirlpool, along with a new outdoor dining space in the Haven’s private restaurant, are part of this exclusive area.

Norwegian Escape is registered in the Bahamas and DNV GL is the classification society.

The ship is now heading to Hamburg for the start of European inaugural festivities. After a two-night stop at Southampton, Norwegian Escape will cross to its year-round homeport, Miami, on Oct. 29. A Nov. 9 christening ceremony is planned.