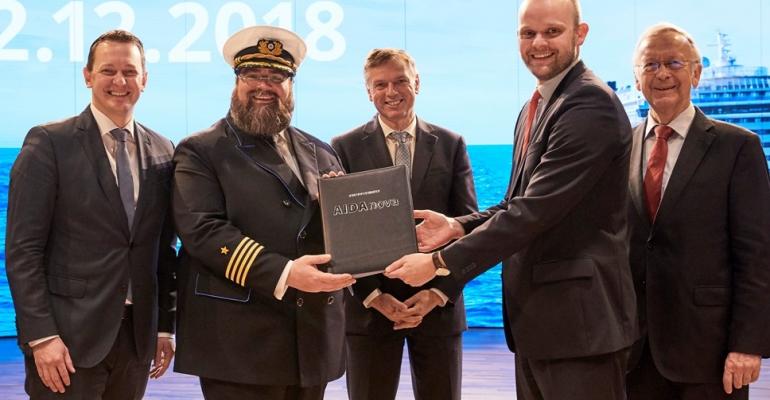 Prior to the handover, AIDAnova had moved from Eemshaven in the Netherlands to Bremerhaven, Germany, where she docked at the Columbus Cruise Centre. The ship was due to sail from Bremerhaven for southern Europe without passengers later on Wednesday and call at Lisbon on Sunday before continuing her repositioning voyage to the Canary Islands.

The first passengers are scheduled to embark Dc. 19 at Tenerife, where Carnival Corp. & plc is operating the new LNG-ready cruise terminal.

During the rest of the winter, AIDAnova is going to sail seven-day itineraries between Gran Canaria, Tenerife, Lanzarote and Fuerteventura as well as Madeira. AIDAnova will cruise the Mediterranean in the summer.

The delivery marks a milestone not only for Meyer Werft and AIDA Cruises, but for the cruise industry as a whole.

'I am so pleased about this extraordinary ship, which is another milestone on our steady path to providing sustainable cruises,' Eichhorn said. Further LNG-fueled ships are due to join AIDA's fleet in 2021 and 2023.

Meyer Werft went to great efforts in recent weeks to hand over AIDAnova before Christmas. The delivery, originally set for mid-November, was pushed back twice. An obvious reason was the complex propulsion plant, which constitutes a real industry first and cannot be compared with ferry LNG propulsion plants that have been in the market for some time.

Additionally, a fire broke out on board while the ship was being outfitted in Eemshaven. This incident is still under investigation, and arson cannot be ruled out.