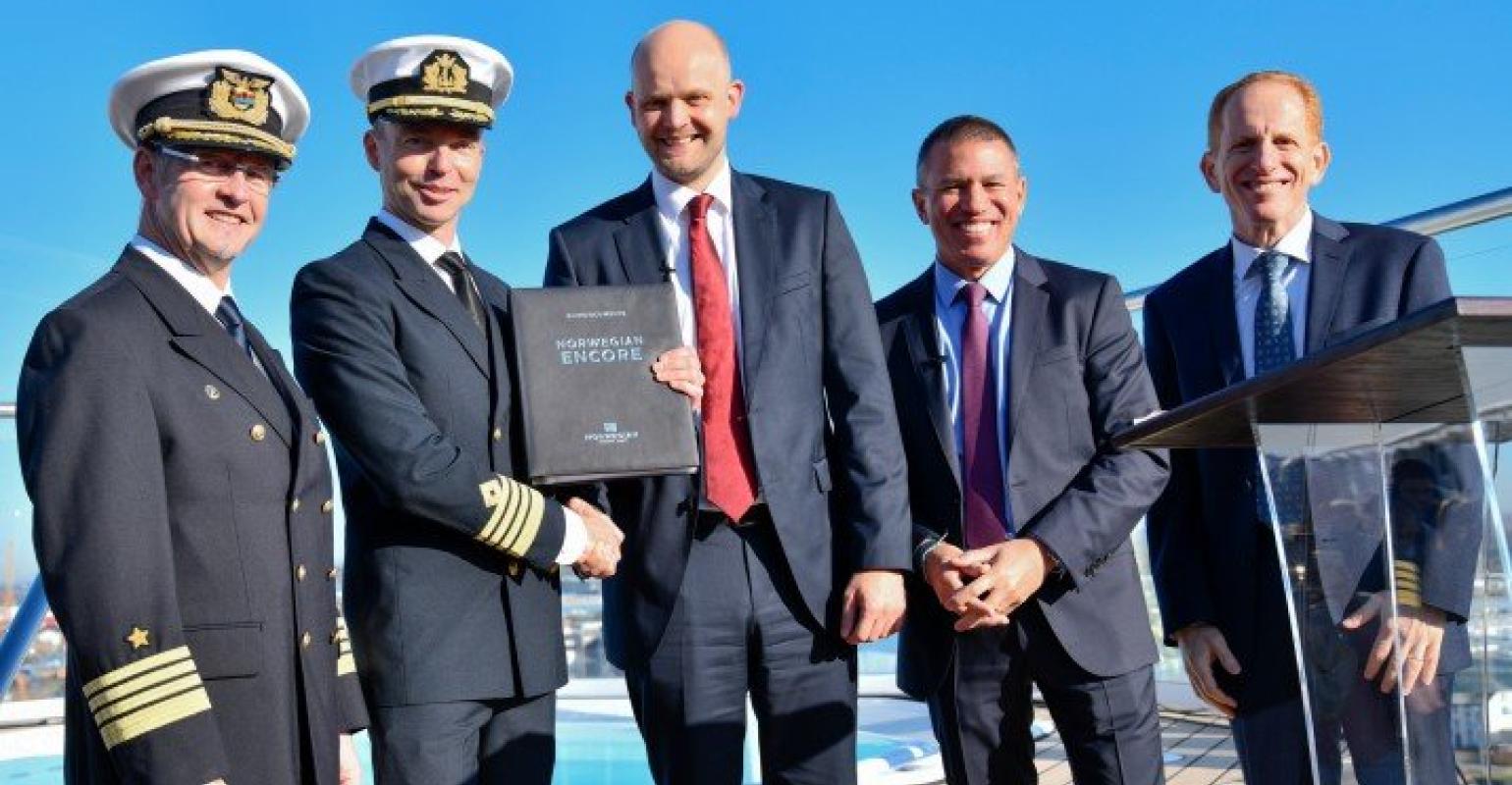 Now begins a nearly month-long tour with preview events scheduled in Europe, New York and Miami, including the ship’s naming ceremony on Nov. 21.

‘Today we celebrate the delivery of our 17th ship and the close of our history-making Breakaway Plus class — a feat that was made possible through a special collaboration with our partners at Meyer Werft,’ said Andy Stuart, president and CEO of Norwegian Cruise Line.

The nearly 1,100-foot-long Norwegian Encore, with a gross tonnage of almost 170,000 and passenger capacity of nearly 4,000, will embark on its first preview cruise from Bremerhaven Thursday, arriving in Southampton on Saturday. Guests will get to experience the newest offerings including the largest race track at sea, the new Italian restaurant Onda by Scarpetta, an enhanced Galaxy Pavilion and open-air laser tag attractions, plus the floating debut of the Tony Award-winning ‘Kinky Boots.’

‘We’re happy to deliver another world-class ship to Norwegian Cruise Line,’ said Tim Meyer, managing partner of Meyer Werft. ‘We are extremely proud of our partnership of over 16 years and honored to have been part of Norwegian Cruise Line’s most successful class of ships. We are confident that Norwegian Encore will continue the company’s legacy of exceeding the expectations of its guests.’

On Nov. 2, Norwegian Encore will commence its trans-Atlantic voyage to the US, arriving at New York on Nov. 10 for a two-day preview scheduled from Nov. 11-13. The ship will then make its way to Miami for a series of events, concluding with christening festivities on Nov. 21, including a live performance by Norwegian Encore’s godmother and Grammy Award-winning singer and television host Kelly Clarkson.

Norwegian Encore features the longest race track at sea — 1,100 feet — with four high-speed curves extending up to 13 feet over the side of the ship. Its outdoor laser tag arena sprawls over nearly 10,000 square feet with the addition of augmented reality elements. And the 10,000-square-foot Galaxy Pavilion sports a new immersive escape room and interactive theater experiences.

‘Kinky Boots’ headlines the entertainment, along with returning passenger favorites ‘The Choir of Man,’ ‘Happy Hour Prohibition: The Musical’ and the rocking Beatles cover band of The Cavern Club.

As part of a recent partnership with JUST Goods, Norwegian Encore will be the first ship in the company to be free of plastic water bottles. By Jan. 1, NCL expects to break out as the first major cruise line to eliminate plastic bottles across its entire fleet.

Norwegian Encore will offer weeklong voyages to the Eastern Caribbean from PortMiami, Bermuda and Canada/New England cruises from New York beginning April 22 and Western Caribbean voyages from Miami beginning Dec. 12, 2020. In spring 2021, the ship will make its US West Coast debut and sail to Alaska from Seattle.