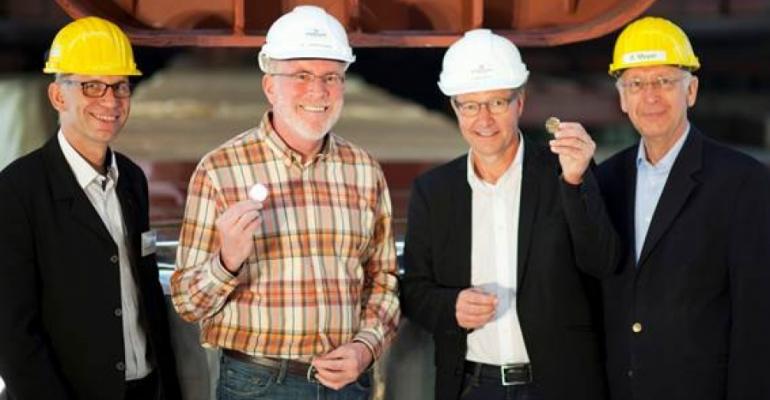 Meyer Werft laid the keel for what will be Norwegian Cruise Line's largest ship during festivities in Papenburg. At the ceremony, block 35/41, the first of 86 blocks that will comprise the 164,600gt Norwegian Escape, was lifted into the covered building dock, officially marking the start of construction.

Norwegian Escape will have 4,200 lower berths and is set for delivery in October 2015. It will be a fast 19 months from steel-cutting to hand-over.

Norwegian ceo Kevin Sheehan placed the traditional lucky coin before the first block, weighing 400 tons, was positioned by a massive crane. A special commemorative coin featuring the ship was created for the occasion.

Sheehan said Norwegian Escape will build on the success of Norwegian Breakaway and Norwegian Getaway.

'Norwegian Escape will be a spectacular ship and it is our honor to bring the dreams and innovations of the Norwegian team to life,' added Meyer Werft managing partner Bernard Meyer.

Norwegian Escape is to begin weekly cruises from its year-round homeport of Miami to the eastern Caribbean on Nov. 14 next year. It will be the largest cruise ship operating year-round from PortMiami. Destinations will be St. Thomas, Tortola and Nassau.