Miami Beach hotel demand has gone up since Zika warning 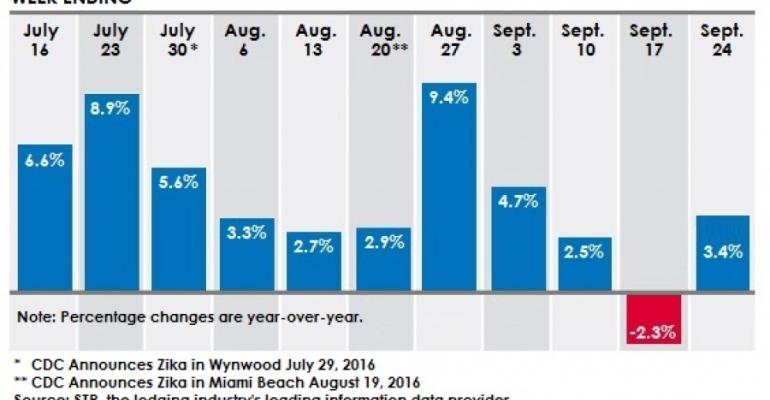 Hotel demand in Miami Beach has risen year over year in seven of eight weeks since Zika advisory was issued (Source: STR, via Greater Miami Convention & Visitors Bureau)
The demand for hotel rooms in Miami Beach has increased year over year for seven of the eight weeks since the Zika travel advisory was issued, according to lodging industry research.

The US Centers for Disease Control and Prevention announced Zika's presence in Wynwood, a neighborhood in central Miami, on July 29, and in Miami Beach on Aug. 19.

The CDC has updated its travel advisory for pregnant women to cover just a 4.5-square-mile 'active transmission zone' in Miami Beach. Evidence of Zika transmission in Wynwood was absent on Sept. 19.

'We didn't get any cancellations, or they’re not enough to mention,' Donald told analysts. He added there could be 'a little bit of noise' about the virus but that has been 'overwhelmed' by the 'great demand that exists for Caribbean cruises.'