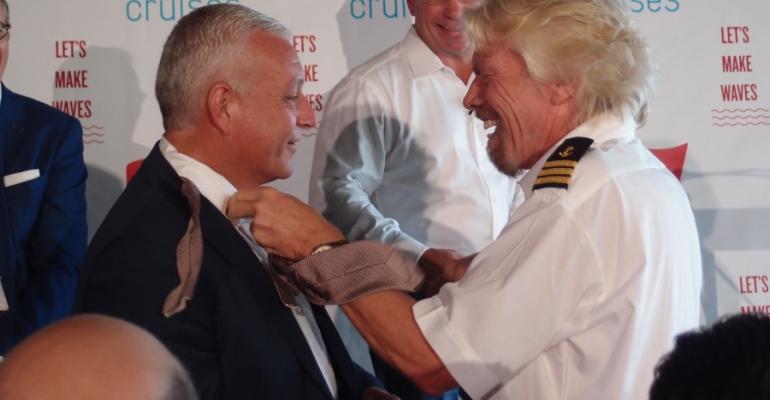 Plus, Miami is his hometown.

And, McAlpin said Tuesday in announcing the first Virgin ship would sail from Miami in early 2020, 'The truth is: My mom made it perfectly clear it had to be Miami.'

For his part, Sir Richard Branson has 'always loved Miami. We have a home here as well.'

'It means so much,' Miami-Dade County Commissioner José 'Pepe' Diaz, who chairs the Trade and Tourism Commission and the International Trade Consortium Board, told Seatrade Cruise News. 'We are the world leader in cruise lines as a port. We have all the attributes—great people and great properties. At the same time, it means we'll continue to improve.

'We do not take the business for granted,' he said.

'We're continually improving the port ... not just for the cruise industry, but for all industry,' he said, pointing to the giant cranes for the container business.

Next week county commissioners will consider an agreement with Virgin Cruises for an initial five-year berthing agreement at PortMiami with an additional five-year option at the cruise line's discretion.

Virgin's business will have an economic impact of close to $6m annually in the community, according to PortMiami director Juan Kuryla.

The ship fits nicely at Terminal F, he added. That's one of the westernmost terminals, close to downtown Miami. As part of the agreement, the port will spend $1.5m on enhancements to accommodate any special Virgin needs, Kuryla said.

The port chief expressed 'how excited we are and how honored we are that we were chosen,' and said the success in attracting the new line was a team effort.

At Tuesday's announcement, which began with Branson's helicopter emerging through a cloud of iconic Virgin red smoke near the port then zipping across Biscayne Bay to land at Museum Park, the entire PortMiami team wore splashes of red.

In Kuryla's case, it was a red patterned necktie—the first of several officials' ties to be snipped off by Branson, who advocates a more casual style.

The PortMiami director later described the billionaire entrepreneur as 'fun, yet an incredible businessman.'