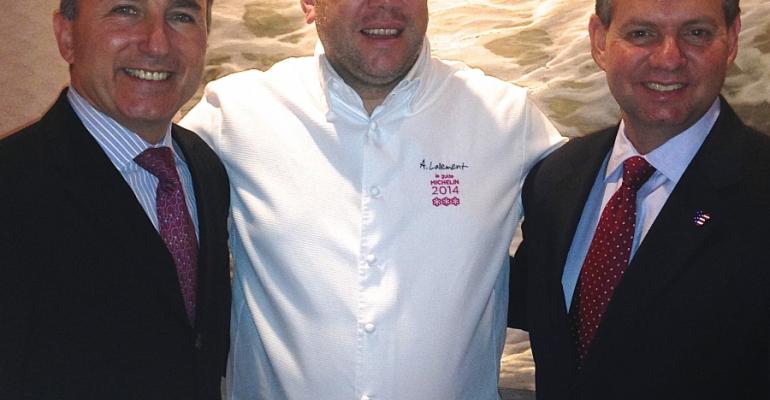 The restaurant is in Reims, one of the great Champagne regions, and chef Arnaud paired each course with Dom Perignon, including the rare P2 Blanc 1998 and the P2 Rose 1995, which has not yet been released to the public. The Dom Perignon P2 Rose 1995, with its hints of violet and cherry, accompanied the wagyu beef and its smoky barbecue sauce.

Lallement and chef Scott Hunnel of the acclaimed Victoria & Albert’s at Walt Disney World Resort sail aboard Disney Fantasy and Disney Dream multiple times annually and have created more than 300 dishes for Remy in the last five years, according to DCL's Ozer Balli, vp hotel operations. Moreover, Balli said, the chefs 'engage with our guests.'

Remy executive chef Patrick Albert, who has worked in a number of Michelin-star restaurants, also travels between the two ships to work with the culinary teams.

Reporters and editors from Wine Spectator, Town & Country, People and other top consumer publications were on hand for the Manhattan dinner.

'Living in New York, we have a lot of dining options. This shows how far cruising, and Disney particularly, has come with dining on a cruise ship. The care and dedication to the food are quite impressive,' one of the editors told Seatrade Insider.

Singling out the wagyu beef as her favorite, she called it 'really special—one of those dishes you'll remember for a long time. The sauce was prepared with a lot of care and skill, so complex and surprising. It was delicious.'

Chef Arnaud called his five years of working with Disney 'a journey' and 'a magical experience' of meeting extraordinary people and having the freedom to create new dishes—150 so far. Adapting to the tastes of US diners is a challenge he relishes. This doesn't mean dramatic alterations, but adjusting sauces, perhaps, and sometimes using different products and ingredients. For example, he said Maine lobster is more tender than what's available in Europe.

Lallement joked that when he began the collaboration, he was 'only' a two-star Michelin chef, 'so Disney bet on the right horse.'

'We want to continue the evolution of Remy,' Balli said. 'The attention to detail is something Disney is known for. The menus change four times a year. And I am not aware of any other restaurant where two such distinguished chefs collaborate. It is incredibly unique and one of a kind at Disney Cruise Line.'

Balli also expressed his delight at working with Lallement, who, at 41, has accomplished so much but 'continues to evolve. He's incredible. He's going to be a worldwide phenomenon.'