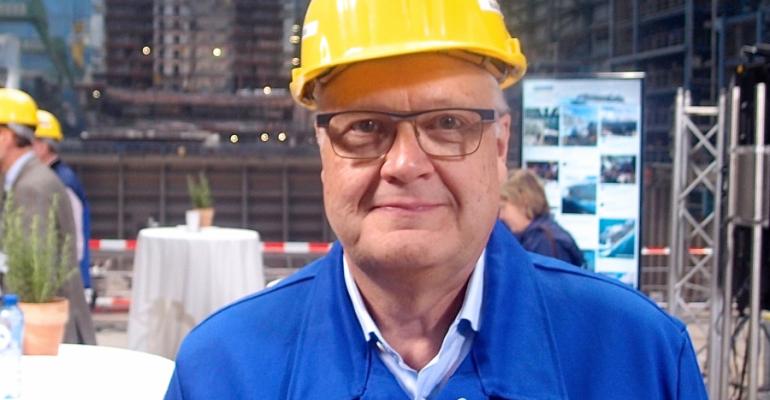 Quantum of the Seas will have a giant 20% leap in fuel efficiency per available passenger day over Oasis and Allure of the Seas through myriad initiatives including an innovative air lubrication system. The ship will ride on a carpet of drag-reducing micro-bubbles that, at speed, is expected to cut fuel consumption a net 7% to 8%, according to Harri Kulovaara, evp maritime for Royal Caribbean Cruises Ltd.

The air lubrication concept is not new but manufacturers have struggled to create a commercially viable system. In technology honed by Royal Caribbean with its partners Foreship, ProcessFlo and Meyer Werft, the critical difference is smaller bubbles.

As Royal Caribbean chairman and ceo Richard Fain explained it, the system generates a very high volume of micro-bubbles, which have a larger surface area than a smaller quantity of big bubbles, and this more effectively reduces drag.

The micro-bubbles are generated by heating, then cooling, water to avoid releasing it as steam.

The micro-bubble system actually improves fuel efficiency by 10% but due to the energy used for heating and cooling the water, the net gain is 7% to 8%, Kulovaara told Seatrade Insider. In development for about a year, the system was tested in a vacuum tank then installed for trial on 2012's Celebrity Reflection three weeks before the ship entered service.

Kulovaara said Celebrity Reflection's results have validated the micro-bubble system. 'We are very comfortable [that the system will perform],' he added.

Meyer Werft was fundamental in helping engineer the system, Finland-based Foreship was critical in the design and US company ProcessFlo created the compressors.

Some years ago Mitsubishi Heavy Industries developed the Mitsubishi Air Lubrication System, which has been implemented on module carriers, and a MALS design for bulk carriers. The AIDA Cruises newbuilds at Mitsubishi are expected to be the first cruise ship application.

Kulovaara said Royal Caribbean had looked at MALS and other technology.

Reducing drag—or friction between the hull and the water—when a ship is underway is critical to fuel savings. In recent years hull forms have been optimized, and air lubrication was seen as a further step, Kulovaara said.

A serendipitous benefit of the system on Quantum of the Seas is that the air bubbles 'drastically reduce the propeller noise,' Kulovaara said. Since the cutting-edge Two70° lounge with its double-deck walls of glass and Roboscreen technology is located just above the 40MW propulsion pods, this is particularly beneficial.

The micro-bubble system together with numerous other small advances went into Quantum's overall 20% efficiency gain from the highly efficient Oasis and Allure of the Seas, Fain said.

For example, when it comes to lighting, Quantum will have zero incandescent bulbs on board. 'Incandescents are energy hogs,' Fain said, noting that a 100-watt bulb produces 90% heat to generate 10% light. Quantum's lighting is provided by much more efficient LED and fluorescent bulbs.

Royal Caribbean also used a 'zero' approach to cutting waste on Quantum, meaning that waste will be reused, recycled or incinerated, with the goal of sending nothing to landfills.

In many respects the company's environmental initiatives exceed regulatory requirements yet there's a notion among the public that cruise ships are polluters, technology guru David Pogue observed during a webcast streamed live from Meyer Werft this week.

'There are a lot of old myths that don't seem to go away no matter what the facts are,' Fain responded.

Why make the ship greener than necessary? Pogue asked.

'It makes good business sense,' Fain said. 'It's not altruistic.'