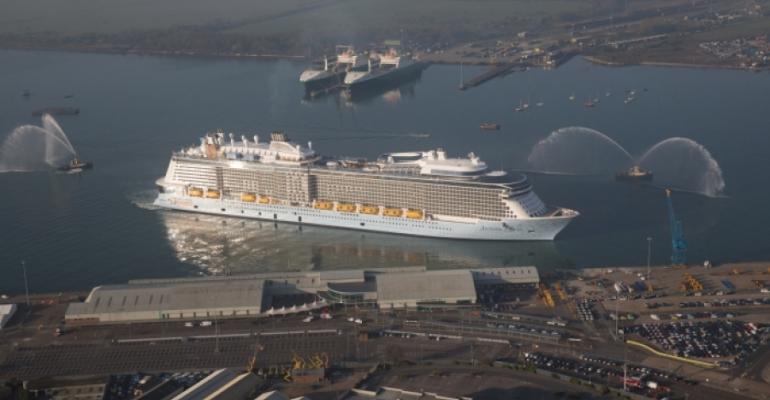 Anthem of the Seas - equipped with Scanship AWP system that processes all gray and blackwater to meet the new MARPOL MEPC 227(64) standard for special areas including Chapter 4.2 with nutrient removal

Higher activity in the newbuild and after-sale segments pushed up second quarter revenue for Scanship, a manufacturer of advanced wastewater purification and waste processing systems, by 57%. The company has a positive outlook based on its increased tendering for ship projects.

Cruise-related orders in the quarter include a Carnival Vista sister at Fincantieri (2018 delivery) that includes a modification of the Scanship AWP system to meet the new MARPOL MEPC 227(64) standard for special areas including Chapter 4.2 with nutrient removal.

Meyer Werft signed four contracts for the supply of two Royal Caribbean newbuilds and two Norwegian Cruise Line newbuilds. The AWP systems are equal to the previous nine newbuild contracts signed since 2010 at Meyer Werft with systems that process all gray and blackwater to meet the new MARPOL MEPC 227(64) standard for special areas including Chapter 4.2 with nutrient removal.

Scanship's backlog at the end of Q2 totaled NOK221m ($26.5m), up from NOK102m. This includes an order for approximately NOK20m for a cruise ship that is subject to financing.

Also in the period, major engineering work was done for the MSC Cruises newbuilds at STX France. And commissioning teams started up the Scanship systems on Viking Star from Fincantieri, Anthem of the Seas from Meyer Werft and the second TUI newbuild at Meyer Turku.

Scanship said more than 20 newbuilds with multiple options will be contracted for wastewater and waste management systems during the next months.

Also, the AWP retrofit market for cruise ships, which was pushed back by the precedence of exhaust gas scrubber refits to comply with tougher standards in Emission Control Areas, is expected to get a boost from the IMO decision on implementation of the Helsinki Commission (HELCOM) standards for wastewater treatment.

The company expects its high tendering activity will bring orders.

To increase its product offering with vacuum toilets and blackwater collecting, Scanship during Q2 entered into a cooperation agreement with fellow Norwegian company Jets Vacuum. Scanship said the aim is to increase its competitiveness in the cruise market. The agreement may also enable sales of Scanship technology beyond the company's core markets.