More international than ever, Royal Caribbean fleet is on the move 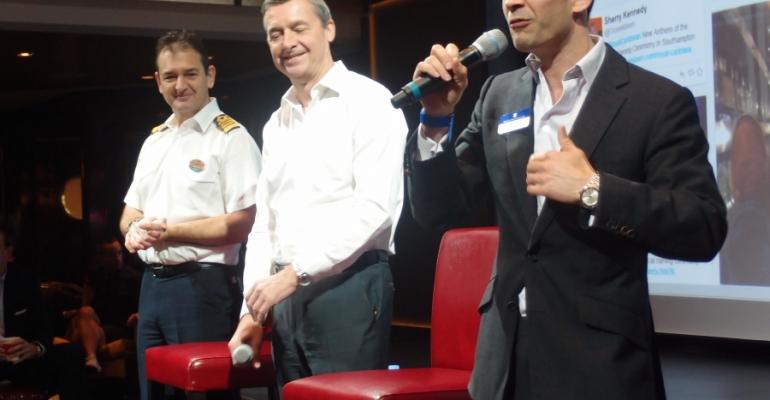 The 'international' in Royal Caribbean International has never been stronger. More than ever before, newbuilds or new classes of ship are going into service in far-flung markets outside the US.

'It's a special time in our development. We're embarking on a very fast period of development,' Dominic Paul, svp international for Royal Caribbean Cruises Ltd., said during Anthem of the Seas' recent introduction in Southampton.

Anthem is spending its inaugural season in the UK. On Saturday Quantum of the Seas departed the US, headed for its new year-round home in Shanghai.

Allure of the Seas is in Europe for a three-week drydock at Navantia Shipyard before starting summer cruises from Barcelona and Civitavecchia (Rome) following a sampler series of cruises on sister Oasis of the Seas last year.

One year from now, Ovation of the Seas will be debuting in Tianjin (Beijing) for the season then reposition to Sydney for the southern summer. The third Oasis-class ship, Harmony of the Seas, will spend its 2016 inaugural season sailing from Barcelona and Civitavecchia.

Paul went on to say the mix of passengers on Royal Caribbean ships everywhere is very international, though Europeans may dominate on some Europe-based ships, Americans in the Caribbean and Chinese in China. Vessels sailing from Barcelona typically sail with 60 nationalities.

'It's a very international product,' Paul said, and the mix of nationalities gives the Royal Caribbean brand 'a very cosmopolitan feel.'

In addition to Chinese, other nationalities are expected to sail on Quantum in China, and though the ship is staffing up with Chinese crew, they're all required to speak English as well as Chinese. Most, in fact, speak three languages.

It will be an 'immersive experience'—which is what the company offers on its seasonal, Brazil-based ship. That means more adaptations to the local market. In the case of Quantum, there will be wider food options.

Royal Caribbean has a hotel operations team in Shanghai to oversee entertainment and guest services and to take the lead on product customization, according to Mark Tamis, svp hotel operations.

Music Hall will transform into a casino, supplementing the existing Casino Royale, with the upper level of the two-deck space becoming a VIP gaming area.

Adjacent to the Solarium the healthy dining venue Devinly Decadence will become the Solarium Bistro, a hot pot venue.

So Quantum-class and Oasis-class ships are striking out around the globe at a faster pace than the Freedom and Voyager classes before them, which spent more time stateside initially.

All told, Royal Caribbean fields seven classes of ships: Quantum, Oasis, Freedom, Voyager, Radiance, Vision and Sovereign (the remaining Sovereign-class ship, 1992-built Majesty of the Seas, will be going to Pullmantur a year from now).

Is that a challenge or an advantage?

It's an opportunity and a challenge, according to RCI president and ceo Michael Bayley.

'As a global cruise line, these ships really do resonate in the marketplace. Our ability to compete in different parts of the market and the huge variety of choice in itineraries is part of our competitive advantage.

'We have a wide portfolio of products that resonate in different areas,' Bayley continued. 'It's a huge opportunity for the company and a competitive advantage for travel agents to have this variety of products to offer.'