HomeNewsMore than a million Australians to cruise the S. Pacific within five years
Recent
News
Recent News
Azamara to implement Versonix Seaware in 2023
May 19, 2022
Cruise passengers in Naples met by singing flash mob
May 19, 2022
Chicago welcomes American Queen Voyages to Navy Pier
May 19, 2022
Sponsored Content
Download: Who is Josh Weinstein?

More than a million Australians to cruise the S. Pacific within five years 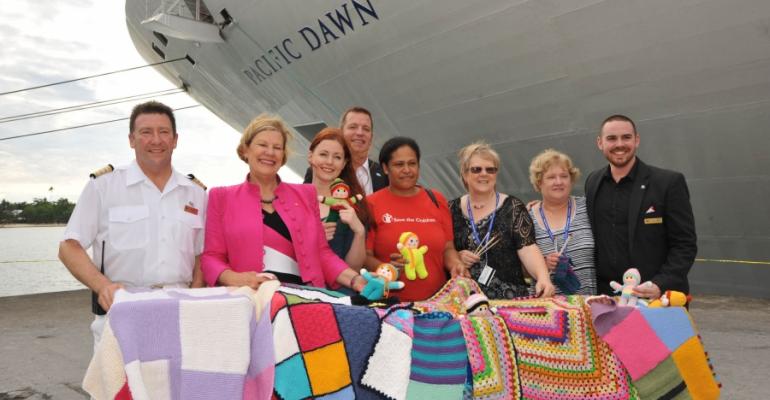 Ann Sherry and Pacific Dawn hotel director Andrew Spencer, at left, with some of the blankets and toys made by passengers

More than one million Australian cruise tourists could be sailing to the South Pacific within five years, with most visiting destinations in Vanuatu Carnival ceo Ann Sherry said in Port Vila on Wednesday.

That would amount to 3m Australian cruise ship passeners a year, with more than a million travelling to the South Pacific based on current itineraries.

‘Such a large number of cruise tourists represents a huge economic opportunity for Vanuatu and its tourism sector,’ she said.

She said this underlines the need for local infrastructure investment which could support existing ports and open up new destinations.

Sherry said Carnival Australia will continue to do everything possible to assist Vanuatu, which suffered a devastating cyclone on March 13 when cruise ship visits were cancelled.

However, after a tremendous recovery operation, passengers aboard Pacific Dawn returned to Port Vila on April 8.

Carnival Australia currently employs 120 people from Vanuatu on its three existing ships and its passengers contribute to the P&O Pacific Partnership run in conjunction with Save the Children that has funded the construction of kindergartens and health posts.

More than 250 blankets knitted by P&O passengers as part of the line's Born to Knit programme have so far been donated to Save the Children in Vila.