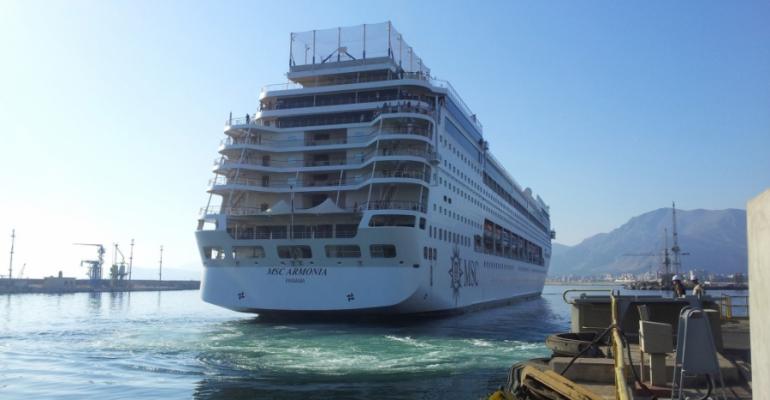 MSC Armonia arrives for 11 weeks of work in Palermo

Over the next 2.5 months, Fincantieri’s team will lengthen the ship by inserting a pre-built 24-meter section containing 193 passenger cabins. In addition, other areas will be upgraded.

MSC Armonia was built as European Vision in 2001 for Festival Cruises and began sailing for MSC in 2004.

Before MSC Armonia’s Palermo arrival, Fincantieri had begun preparations for the massive project on board and in the shipyard. Last Thursday the new midship section was floated into the yard and towed into the drydock.

On Sunday morning, MSC Armonia entered the dock and work immediately began as the cutting line was marked on the hull. The midsection is scheduled to be inserted mid-September.

MSC Armonia is due to resume service on Nov. 17 with a one-off inaugural cruise from Genoa to the Canary Islands.

In addition to new cabins, the ship will gain areas for the Baby Club built in partnership with Chicco, a new Mini Club and Young Club for kids and a Teens Club.

The improved buffet area will be open 20 hours a day when the ship re-enters service. A new lounge and an expanded restaurant are planned, too.

In other work, MSC Armonia will add a library and the MSC Aurea Spa will be enhanced. A new water park will be equipped with spray features and water cannons.

After MSC Armonia's transformation, MSC Sinfonia is due to undergo similar enlargement and updating Jan. 12 to March 16, followed by MSC Opera May 2 to July 4 and MSC Lirica, Aug. 31 to Nov. 9, 2015.