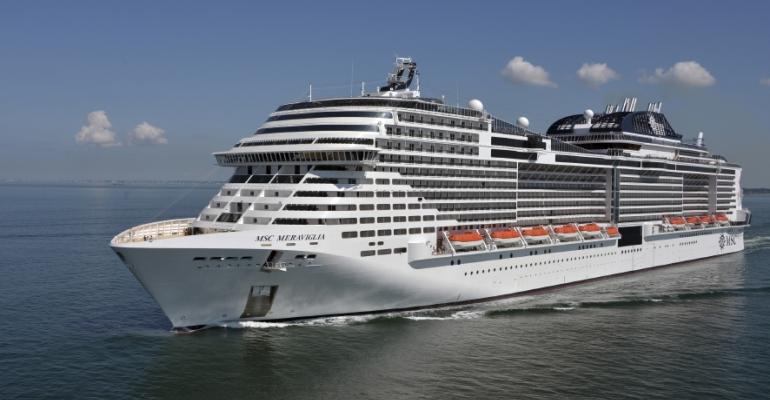 MSC Cruises announced MSC Meraviglia is fitted with an integrated video surveillance system to optimize security monitoring on board the ship and which will allow, among other features, for the speediest intervention in the unlikely event a person or object falls overboard.

The new man overboard detection system was developed to further optimize security aspects for all guests and crew on board the ship, notes MSC Cruises.

The intelligent video capturing and analysis system which has been developed by MSC Cruises in collaboration with security technology experts, Bosch and Hewlett Packard Enterprise, has been undergoing a pilot phase of extensive stress-testing and continuous software upgrades onboard the company’s newest ship which debuted in June.

The cruise operator reports through over 25,000 hours of video analysis, extensive software testing and continuous algorithmic updates, the system has now reached a confirmed accuracy level of 97%.

Pierfrancesco Vago, MSC Cruises’ executive chairman said: ‘we have developed a highly-innovative solution that, through the use of military-grade technology, will allow ship command to take immediate action if needed. While a ship at sea is a challenging environment for accurate video security monitoring and operating high-tech equipment, our teams have managed to successfully develop a system that is at the same time accurate, stable and reliable.’

The new MSC Cruises system consists of a comprehensive shield of intelligent optical and thermal video cameras which provide nonstop comprehensive surveillance alongside the relevant exterior parts of the ship. All captured video images are streamed in real-time to a Central Security Room where the video stream is monitored together with all other inputs from the 1,200 HD CCTV cameras on board the ship.

MSC Cruises’ security department and experts from Bosch and Hewlett Packard Enterprise have worked over 14 months to create the right surveillance setup.

While a key component in the surveillance infrastructure is to install highly resilient hardware (cameras, casing, base) that resists tough conditions at sea, a significant part of the process is to program the software in such a way it provides reliable and accurate data. In order to further increase the accuracy of the captured video images, the latter are processed and analysed by two separate and independent image processing systems.

This double security system has allowed to significantly lower the error margin for false alerts – typically caused by natural movements such as waves, reflection of sun or moon, or a bird triggering the alarm.

In case of alarm, an acoustic signal and light will alert the ship’s security officer in the central security room who can immediately connect to the system and acquire all images and data and, if necessary, retrieve or review the relevant video images. The security officer has direct access to the ship command at the bridge to allow for immediate action.

Over time, similar integrated systems will be developed and deployed across MSC Cruises’ global fleet.