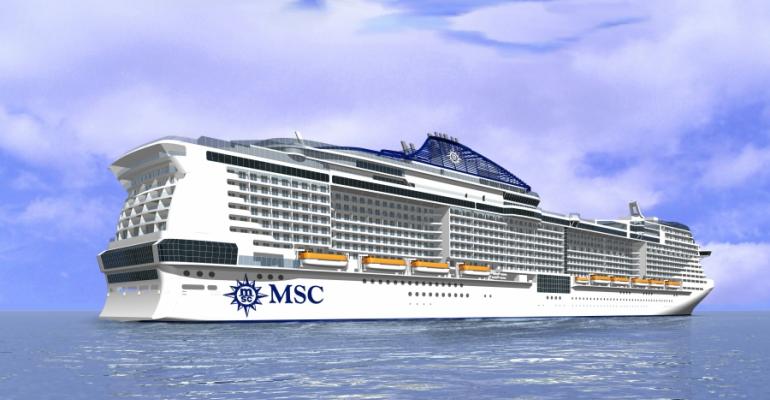 He called the 315mtr MSC Meraviglia ‘one of the greenest and safest ships in the industry, as well as one of the most technologically advanced,’ adding ‘this ship is perfect for cruising year-round in any destination almost everywhere around the world.’

The 5,700-passenger, 167,600gt MSC Meraviglia, due to be delivered in May 2017, will spend her first summer sailing the western Mediterranean and using three homeports: Genoa, Marseille and Barcelona.

The ship will feature a services ranging from near field communication technology to mobile applications and the use of smart devices throughout.

The technology will allow passengers to make payments, access their cabins or geo-locate children, friends and on-board locations using their cruise card or smartphone.

A 480sq mtr LED screen will form the entire ceiling of the interior promenade. Like a digital sky, this LED image vault will beam out compelling images and vistas day and night.

MSC Meraviglia is the first of two identical ships on order from STX France. The second is due to service in 2019. In addition, MSC Cruises has options for two further Vista-class ships to be delivered by 2022.

In other company news, the steel-cutting of the first of its other new generation of ships, MSC Seaside, is taking place today during a ceremony at Fincantieri’s Monfalcone shipyard.

The ship is set to debut in November 2017, and will be christened the following month in Miami – the first time an MSC Cruises ship is christened in the US. More detailed information including an interview with Onorato to follow.