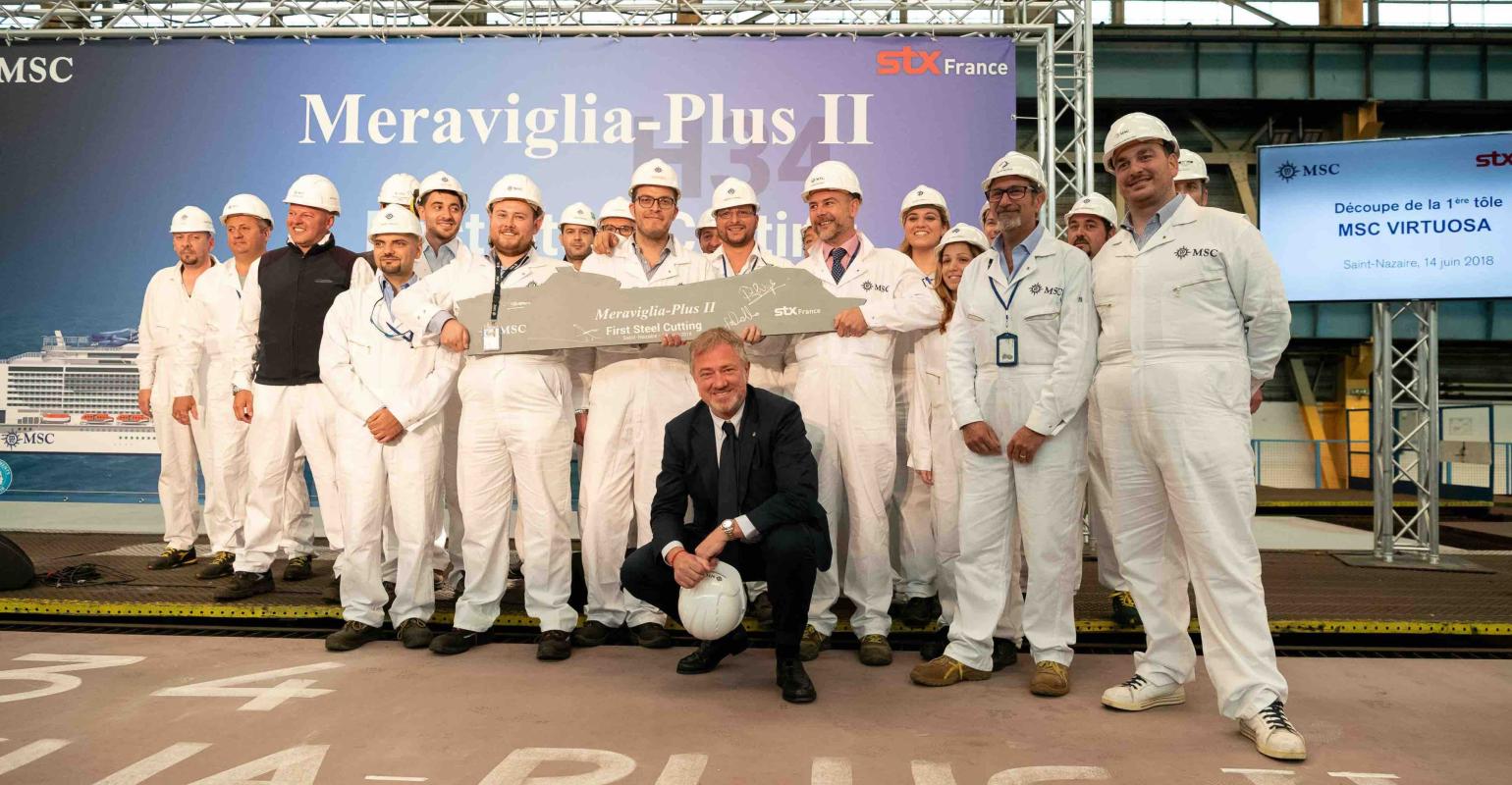 The steel-cutting for MSC Virtuosa was just one of the milestones for MSC Cruises in Saint-Nazaire today. In front is MSC Cruises executive chairman Pierfrancesco Vago

MSC Cruises—known for grand events—outdid itself today at STX France by ordering a fifth Meraviglia-class ship, celebrating the float-out of MSC Bellissima, holding a coin ceremony for MSC Grandiosa and cutting steel for and giving a name to its 2020 newbuild, MSC Virtuosa.

The newly ordered €900m ($1.06bn) ship, for 2023 delivery, will be first in the Meraviglia series to have LNG (dual fuel) propulsion plus an advanced wastewater purification system that meets the stringent HELCOM standard for nutrient removal.

The ship will have double-occupancy capacity of 4,816 and room for 6,335 passengers in total. It will have the same dimensions as the pair of Meraviglia-Plus newbuilds but slightly higher gross tonnage, 183,500, due to the LNG engines.

In addition, MSC Cruises inked the financial package for its first two World Class newbuilds, the futuristic, LNG ships of 205,700gt that are due to enter service in 2022 and 2024.

Speaking at a ceremony in the Saint-Nazaire shipyard in the presence of French economy and finance minister Bruno Le Maire, MSC Cruises executive chairman Pierfrancesco Vago said: 'With the announcement of yet another new vessel, the 13th under our 10-year investment plan, we are affirming our commitment to sustainable growth for our company.'

In total, a stunning €11.4bn investment.

'We will be a big company, a big brand,' Onorato said, adding that MSC's growth strategy does not depend on benchmarking with others.

'What's important is we are very confident about the development of the cruise business in future and to operating in many areas of the world where we need to be, catching growth opportunities.'

Well-established but still expanding in Europe, where—for example—it has the biggest cruise market share of any international cruise operator in Germany—MSC is making a big push in the UK and North America, continues as the market leader in South America and is growing in Asia.

MSC Bellissima will be christened in Southampton in March 2019, while MSC Grandiosa's christening is set for Hamburg in November 2019. Fly-cruises to the Mediterranean, Dubai and the Caribbean, particularly its Barbados homeport, will further develop the UK where, Onorato said, MSC has a 'very powerful' management team.

Stateside, MSC Meraviglia joins the Miami lineup in late 2019, along with MSC Seaside, MSC Divina and MSC Armonia sailing to Cuba (a program that starts this winter, newly carrying US citizens), and Onorato said the company will continue to grow in the US.

He's pleased about the recently announced plans for more berths to accommodate bigger ships in Havana. 'Cuba can become one of the successful destinations and it's good news for the Caribbean,' he said, noting that MSC already operates widely in the region.

When it comes to South America, MSC remains steadfast—despite 'ups and downs, with some issues we need to manage'—to the point of deploying its new MSC Seaview in the 2018/19 southern summer, a 'strong endorsement,' Onorato said. The line sources primarily from Brazil and Argentina.

Meanwhile, MSC is growing organically in Asia, where MSC Lirica has been operating, the larger MSC Splendida just began sailing in April and MSC Bellissima will be deployed from spring 2020. This gradual ramping up helps the nascent cruise distribution system there adapt, Onorato said.

He noted MSC's focus is not just on China but the wider region. Japan presents 'a good opportunity.' with this year's cruises proving 'very successful.'

In 2020, MSC Lirica has been chartered for a 40-day period by the Olympics Organizing Committee as a floating hotel for the Summer Olympic Games in Tokyo.

Unlike other large cruise industry players, MSC continues to pursue a singe-brand strategy and remains a family-run company.

'We are investing not only in ships, but in ideas and innovation,' Onorato said, 'because the ships we're ordering now will be operating 20 to 30 years from now ... So we need to understand what the consumer will want 20 years from now. That is the most difficult thing.'