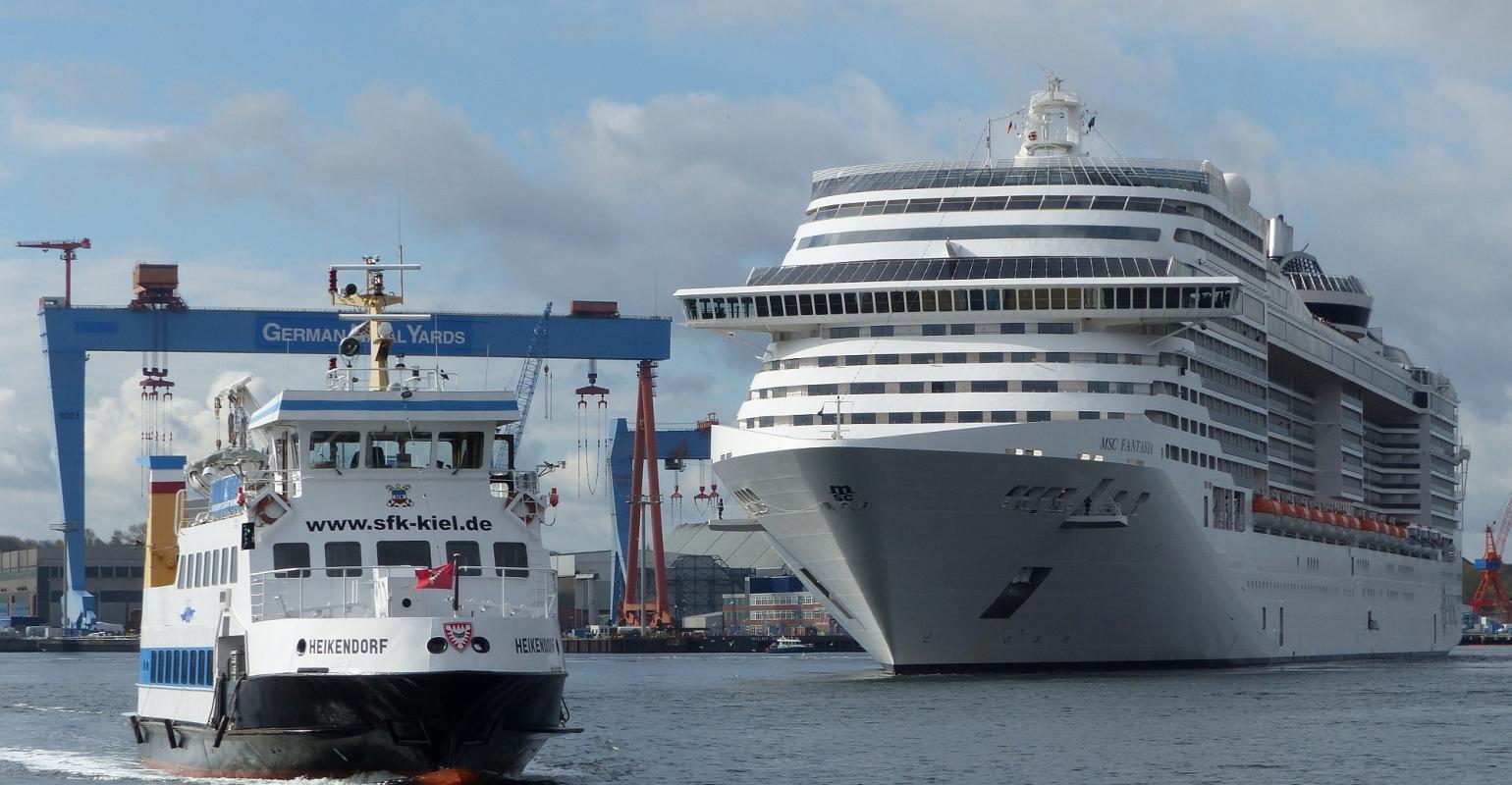 MSC Fantasia will undertake 21 cruises from Kiel this season and shares with AIDAvita the title of most frequent visitor to the Kiel Fjord in 2017.

The biggest cruise ship to visit the Port of Kiel this year, MSC Fantasia arrived last Saturday from Zeebrugge.

The 138,000gt and 333mtr long MSC Fantasia was given a water fountain welcome and  escorted to her berth at the Ostseekai Cruise Shipping Terminal by a tug belonging to the Kiel tug and ferry company SFK.

At a reception later on board, port head Dr Dirk Claus welcomed the ship’s captain Stefano Aiello to the Schleswig-Holstein state capital and presented him with the port’s official maiden visit plaque.

Dr Claus, who is md of the Port of Kiel (Seehafen Kiel GmbH & Co. KG), said: 'We are delighted to be able to welcome a big ship of the Fantasia-class to Kiel for the very first time. The visit shows that ever bigger cruise ships are now being brought into service in the Baltic.'

The facilities and logistics at the Ostseekai Terminal and in the Ostuferhafen are well equipped to cope with ships of 4,000 passengers and more, he added.

MSC Fantasia will visit the major cities of the Baltic (with calls in Kiel, Copenhagen, Stockholm,Tallinn, St Petersburg and back to Kiel) and also the Norwegian fjords (Kiel, Copenhagen, Geiranger, Flam, Stavanger and returning to Kiel).

'Because of its geographical location, Kiel is particularly attractive as the starting point for butterfly cruises,' commented Claus.

'The combination of Baltic and Norwegian routes is a very interesting option,' he added.

Kiel is at one and the same time a cruise turnaround port and a tourist destination. International cruise ship passengers can board in Copenhagen and enjoy day excursions ashore from Kiel into the surrounding region and to the Hanseatic city of Lübeck and the north German metropolis of Hamburg, he continued.

MSC Cruises has been visiting Kiel on a regular basis for twelve years. First vessel to call was Rhapsody in 2005. In 2006, Kiel became a base port for the cruise line and has continued to play an integral part of MSC's route planning for northern Europe and has up to now been visited 332 times by nine different company cruise ships.

Claus said: 'MSC is the company which has visited Kiel the most times.'

To date some 1.2m passengers have boarded or disembarked from an MSC ship in Kiel and this year well over 100,000 more guests of MSC are likely to be added to that.

MSC Fantasia will visit the Kieler Woche sailing regatta twice this year and can be seen on both June 17 and again on June 24 in the Kiel Fjord at northern Europe’s biggest maritime folk festival and sailing event.

Kiel has three terminals for ferries and cruise ships at the Ostseekai, Norwegenkai and Schwedenkai – all close to the city centre. In addition, very large cruise ships can also use Berth 1 in the Ostuferhafen.

Among its most regular customers, apart from MSC, are AIDA, Costa and TUI Cruises. By the end of this year’s season an estimated half a million cruise ship guests are expected to have visited Kiel, in addition to the port’s 1.6m ferry passengers