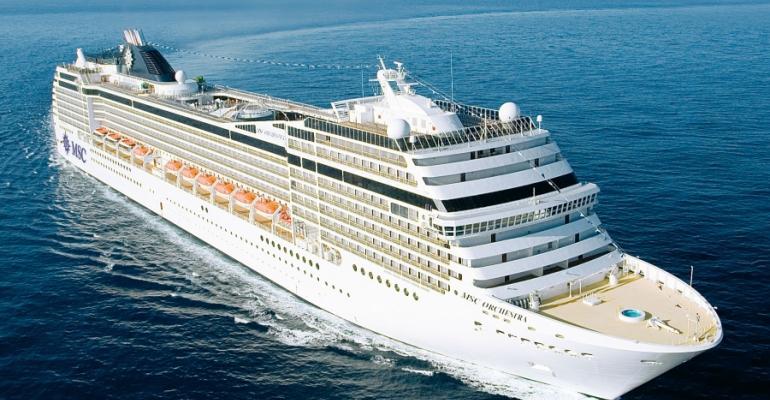 MSC Orchestra sailing in Asian waters
MSC Cruises made its first foray into Asia Thursday, a region it described as ‘the new trendy area of cruising and the future area of growth’.

Welcoming some 200 passengers on board, MSC Cruises ceo Gianni Onorato said: ‘This is a historic moment in our company’s journey – the first time an MSC Cruises ship has called at the magnificent city of Singapore. In fact, all 13 ports of call on MSC Orchestra’s pioneering grand voyage are firsts for MSC Cruises.’

He added: ‘We are in Singapore to show how firmly we believe in the Asian market’s potential, which is only going to grow further in the foreseeable future.’

Speaking to Seatrade Insider, Onorato disclosed: ‘We will be deploying into Asia and need to decide when. We will perhaps go to North Asia with one of our newbuilds.’

She said cruise is a high growth business with a lot of opportunities and this growth is led by Asia where now some 52 ships are deployed and including nine year-round deployments.

A Boston Consulting Group study had shown that 40% of spending is going to come from Asia by 2020, she said.

‘Southeast Asia is a cruising playground in its own right – with over 25,000 islands and diverse attractions ranging from cosmopolitan cities to pristine beaches and UNESCO Heritage sites. We are excited that travellers from all over the world will get to experience so much of Asia through MSC Orchestra,’ she added.

MSC Cruises executive director for emerging markets, Antonio Paradiso, said: ‘MSC Cruises has grown 800% since 2004. In 2014, we carried 40,000 guests per day on our fleet of 12 ships, and with up to seven new ships in two state-of-the-art prototypes coming online by 2022 we’ll double our current capacity. We used to carry 80,000 guests per year at the start and we’ll carry 80,000 guests a day at the end of our investment plan. This growth will unlock fresh opportunities, including new markets and regions, and untried itineraries.’

The 2,550-passenger MSC Orchestra is currently undertaking a 33-night voyage from Dubai to Perth, Australia. The ship will call 13 ports in eight countries across three continents. Singapore is the sixth port of call on the journey.

After an overnight stay, MSC Orchestra will sail for Benoa in Bali followed by four sea days before arriving in Cairns, Australia.

MSC Orchestra’s time Down Under covers maiden calls in Brisbane, Sydney, Melbourne and Adelaide, before her final destination of Fremantle, the port serving Perth.

While MSC Orchestra marked the first time an MSC Cruises’ ship has called in Asia, the line has been carrying Asian cruisers for a period of time, particularly in the Mediterranean and the Arabian Gulf. ‘We are the biggest importers of Asian cruisers in the world,’ Onorato said.