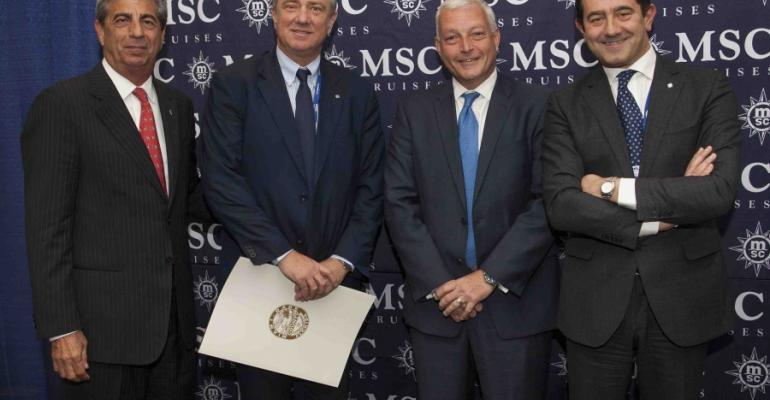 'We're serious,' Muskat said. 'The company is invested in this market and here for the long term.'

'North America is still the place where the most cruise-experienced people are,' elaborated Rick Sasso, president, MSC Cruises USA, on why it's a priority. The market is 'more economically sound and enduring [in the face of] world events.'

MSC has been gearing up for this US capacity spike over years, and with at least four big new ships in the pipeline, 'Now is the time to make that fullest commitment,' Sasso said.

A dedicated terminal at PortMiami will give the Seaside vessel priority berthing every Saturday starting in late 2017, and MSC Divina will continue sailing from Miami on varied itineraries during the November to April period.

Vicky Garcia, chief operating officer and co-owner of the large home-based network Cruise Planners, an American Express Travel representative, said having a new year-round ship in Miami will be great for MSC and gives options to clients looking for a new experience.

The 'amazing water feature complex will make her a desirable ship for families looking for options and makes it easy for agents to sell,' Garcia said.

In preparation for the growth, MSC more than doubled its US sales force last year and staged a 20-city road show that drew more than 2,000 travel agents. MSC Divina has been seen by 6,500 agents since the ship began sailing from Miami in November 2013. The line is a preferred supplier for giant Vacation.com, among others, and national accounts relationships are going well, in Muskat's view.

The result is that hundreds of new agencies are now booking MSC.

The line plans another agent road show this year, to be announced at cruise3sixty on April 22, when MSC will unveil its new travel agent booking engine.

Plus, consumer marketing soon will ramp up to include national advertising on cable television. This will be a longer and broader television presence than ever before, with some fresh creative elements and 'significant' media spend. This hefty campaign will continue through 2016 and 2017.

Agents have been great at boosting awareness of MSC, Muskat said. Now it's time for MSC to make a big push to help drive consumer demand for the brand.

Both Sasso and Muskat are recognized as two of the most consistently agent-friendly cruise leaders. This has been their personal philosophy and MSC's corporate philosophy ever since the US office opened 11 years ago.

The line offers higher commissions and pay for ancillary sales such as shore excursions. A just-concluded groups promotion caught attention with 18% pay, and a one-time 60-day program went as high as 25%. The 'Inclusive Experiences' pricing also lifts commission and helps agents up-sell.

Beefing up the sales force on the East Coast, particularly in the key Florida and Northeast markets, while adding more people in the Fort Lauderdale office to help service Midwest and West Coast agents, has given MSC 'muscle' disproportionate to its capacity.

'We are a gorilla,' Sasso said.

And US competitors say MSC gets media exposure beyond its size. 'For essentially a half-ship [the seasonal MSC Divina] company in Miami, they get an extraordinary amount of coverage overall,' said a marketing executive from a South Florida-based line.

At Cruise Shipping Miami, 'They stole the show,' he told Seatrade Insider, referring to MSC's standing-room-only news conference about Seaside's US deployment. 'The story was 'everywhere you looked,' he said.

Yet it's a continuing battle for awareness.

Miami Herald travel editor Marjie Lambert said among the public, she still hears 'Who's MSC? even after the MSC Divina made a pretty big splash.' It can't be easy for a European brand with a one-ship presence to stand out against the big Florida lines, she said.

'And with the elaborate water parks and gee-whiz gadgetry that the mainstream lines' new ships have, MSC fades even further into the background,' Lambert said. 'Their prices are competitive,' though, and the renderings of Seaside's water slides and aqua park 'look pretty snazzy,' she said.

'Maybe those water slides running out over both sides of the ship and its new "Slideboarding" technology will catch the public's attention when that ship gets here in 2017,' Lambert said. 'But right now, when people planning a cruise talk to me about the ships and cruise lines they're considering, they rarely mention MSC.'

This is why a leading family travel expert predicted the key to MSC's success as it goes head-to-head with better known lines in the summer Caribbean market will hinge on winning over families and multigenerational groups.

She hasn't sailed with MSC yet but is familiar with a number of its attributes that are attractive to families, including that kids 11 and under cruise free when sharing a room with two adults, the Lego partnership and the kid-friendly dining program. The MSC Yacht Club is also a 'strong plus for multigenerational families who want diversity in accommodations' should grandparents or other adults seek a quieter, more upscale experience, she said.

'Their new ship looks beautiful and the large, cutting-edge aqua park should be a real draw,' she added. 'Kids and teens really zero in on water features such as pools and water slides. The ropes course looks cool and MSC's kids and teens programs also sound excellent.'

The Seaside design is 10 meters shorter and four meters wider than the Fantasia-class ships, and it has even more public space. The length—323 meters/1,059 feet, compared to Fantasia's 333 meters/1,093 feet—means it will be able to access more ports.

MSC's Mediterranean on-board style will continue, as will the penchant for using high-quality marbles and woods and creating public spaces that flow gracefully one into the other, Sasso said.

According to MSC Cruises ceo Gianni Onorato, when the Seaside ship is delivered by Fincantieri's Monfalcone yard, it will sail directly to Miami for its naming by Sophia Loren.

'It will be the most unique christening of a cruise ship in recent times,' Sasso predicted.