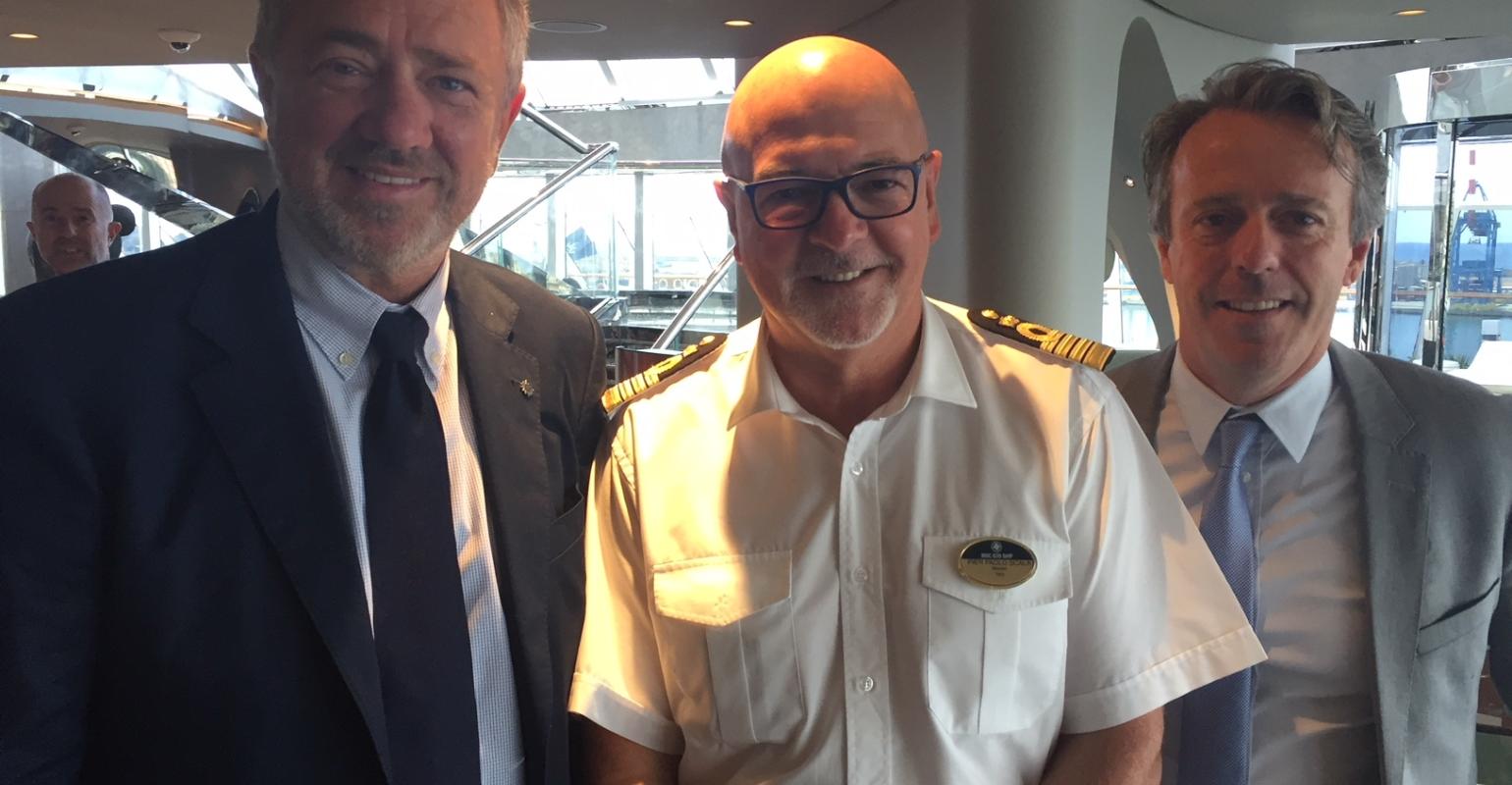 Pierfrancesco Vago, MSC Seaview master Pier Paolo Scala and Trevor Young
A quote by actor Tom Hiddleston: 'Stay foolish, stay curious, and above all, stay humble,' was the opening remark made by MSC Cruises' executive chairman Pierfransco Vago when asked by Seatrade Cruise News how he was feeling, in an exclusive interview on board MSC Seaview in Genoa.

Sitting in the ship's MSC Yacht Club, on the eve of the naming of the latest addition to the Aponte family's expanding cruise fleet, Vago was clearly delighted to be in receipt of the company's third 150,000gt+ cruise ship inside a year, and also excited at the prospect of adding up to nine more newbuilds through to 2026, but he cautioned, 'when introducing prototypes, often also comes challenges.'

MSC Seaview is a sister ship to MSC Seaside, the first prototype of the Seaside class delivered late last year and targetted for the North American market, sailing out of Miami.

Technical improvements to Seaside and Seaview

MSC Seaside experienced some issues in the early days of operation but Vago was quick to reassure: 'six months on, we have made some technical improvements related to the Advanced Wastewater Treatment, piping and air conditioning systems to both Seaview, and also now on Seaside.'

Seaview's delivery was delayed a few days but Vago confirmed all upgrades in these areas, incorporated into MSC Seaview whilst still at Fincantieri's Monfalcone yard, have also been made in situ on MSC Seaside.

Part way through its €10.5bn newbuild investment plan that sees up to 12 cruise ships joining the fleet inside 10 years, Vago is confident that the supply/demand curve is sustainable for the company.

Between 2017-2020 alone, it will bring into service six newbuilds and double its capacity in a little over 3.5 years.

Referring to the Aponte family business, Vago cited: 'It is in our DNA as a group to grow organically
and in 45 years we have never paid a dividend, preferring to reinvest into the company and plan for future growth.'

He continued: 'nearly 25% of the forward orderbook of the major companies is for MSC Cruises and being a global company it is a natural way to evolve.'

153,516gt MSC Seaview will be named Saturday evening in Genoa by godmother Sophia Loren and is set to undertake her maiden voyage from the port on June 10 and spend the summer sailing in the West Med offering six embarkation ports before heading off to Brazil for a winter season.

Vago is not phased about adding more tonnage into the Med: 'we were ahead on bookings and yields in Q1, 2018 compared to 2017 for the West Med and now we are starting slowly to go further eastwards too with a few cruises returning to Turkey this year.'

Sourcing is done by MSC in 70 countries worldwide and Vago noted Europe 'is growing in a strong way as are North America and Asia.'

Asian passengers are realising the significant appeal and difference between undertaking a grand tour of Europe by cruise versus a grand tour by bus, he exclaimed.

Keeping ahead of technology is also a key focus and he is excited about the introduction of in-cabin voice-activated digital personal assistant Zoe, named after his young daughter, which will be conversant in seven languages - 'it's not just seven but also includes dialects within some of those languages too,' Vago explained.

Zoe will debut on Bellissima, arriving next February, and will be rolled out across the fleet, says Vago as he sees it, 'as a perfect way of enhancing the guest experience, especially with the multitude of different languages that are spoken onboard by our passengers.'

Room for older, smaller tonnage too

With so much new advanced technology being introduced on the new ships is he concerned about filling the older, smaller Musica and Fantasia class ships built between 2006-2012?

'The Musica and Fantasia classes still have generous public spaces and staterooms that are often bigger than the newer vessels now debuting and whilst they don't have the choice of speciality restaurants quite a big percentage of our passengers choose the itineraries rather than the ship so
having these smaller vessels allows us to define different itineraries to the larger, newer additions.'

He cited Cuba as a good example, 'where these smaller ships already protrude up to 80mtr beyond the piers when berthed, but are a perfect match for that shorter cruise market' and closer to home, 'they still enable us to call in the heart of Venice,' he reminded.

Looking further ahead and the introduction of the company's first two LNG-powered World Class series delivering in 2022 and 2024, Vago said, 'we are about 90% confirmed what we want to do with those ships on the technology side and are just fine tuning the final details with the shipyard.'

He confirmed the order is still 2 plus 2 options, 'but it is likely that there will be four ships,' he said with a wry smile.

Staying with green-related issues, Vago reminded that 11 of the 15 ships in service are able to undertake cold ironing operations in port, 'and we want to do it as long as the power is clean' he stressed and sitting beside him, Trevor Young, vp newbuilding underscored, cold ironing will be the future, along with scrubbers and LNG and other alternate fuels which we are also studying closely.'