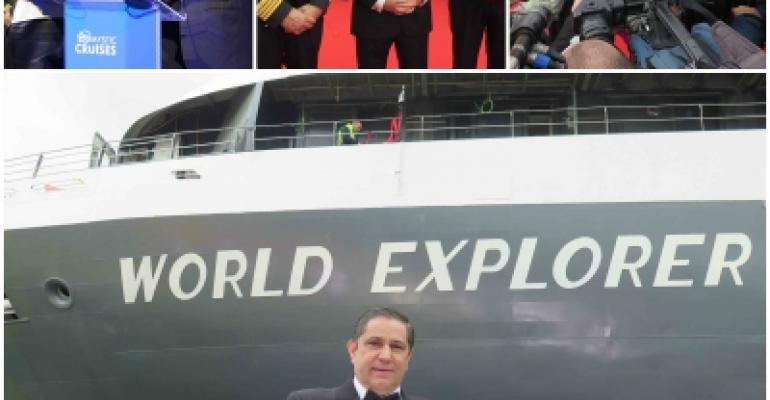 The new partner—to be announced later in April—is a major investor in the global travel sector and will be buying in to Mystic's entire cruise division.

Mystic is now dedicating four premium expedition newbuilds exclusively to the US market instead of the three originally envisioned.

'The market is bullish. The clientele exist. There is huge demand for smaller, high-end vessels,' Ferreira said during a one-to-one interview in Porto, home to his diversified company, Mystic Invest.

The initial US market fleet will consist of World Navigator and World Traveller, due to enter service in 2021, followed by World Seeker and World Adventurer in 2022.

(These 9,431gt, 200-berth vessels are the sisters of Ferreira's prototype oceangoing ship, World Explorer, just named over the weekend, and 2020's World Voyager. World Explorer and World Voyager will operate on seasonal charters to Quark Expeditions and, otherwise, for Germany's Nicko Cruises, a division of Mystic Invest.)

Three of the ships are contracted at WestSea Viana; the next three are expected to be firmed in May/June, Ferreira said. Ultimately, he wants a fleet of 10.

Rather than the modest South Florida office first planned, Mystic will be setting up in downtown Fort Lauderdale in an operation that will ramp up to 60 people over three years. The office will be led by Mystic Invest veteran Alberto Aliberti, as president of Mystic Cruises' US operation, and handle sales, marketing, accounting and reservations.

Mystic Cruises will focus on travel agents and tour operators to distribute 90% of its product. 'We'll be [staffing with] key senior executives known to the trade,' Ferreira said, adding that technology and support systems are already being selected.

Value for money is how Mystic Cruises intends to stand out in a market that's seeing a growing number of expedition ships coming from established brands. 'We are absolutely sure that we're going to be better than our competitive set. We are a lean, entrepreneurial company. We can market at a very competitive rate,' Aliberti said.

Per diems ranging from $650 to $1,200 are planned, with the upper-end fares to provide a more inclusive product, bundling in items like drinks and gratuities.

US market sales to open in Q4

Sales for the first US-dedicated ship, launching in 2021, are to open in the fourth quarter this year.

Itineraries have not been announced but Ferreira cited great demand for the polar regions so Antarctica, Spitsbergen and Greenland are in the cards. Other destinations will include the Norwegian Fjords, the Baltic, Brazil, the Panama Canal and the Pacific Coast of South America, including the Chilean Fjords.