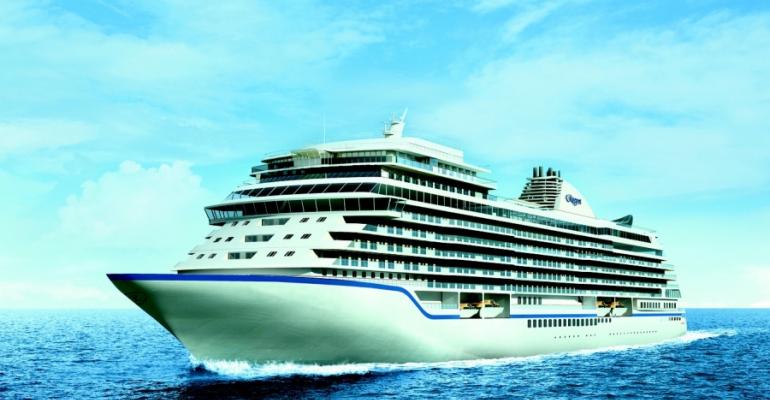 The ship is to be delivered in 2020
Update adds analyst commentary on the price. Norwegian Cruise Line Holdings has reached an agreement with Fincantieri to construct a sister ship to Seven Seas Explorer for Regent Seven Seas Cruises for delivery in 2020. The price is €422m.

The new Explorer-class vessel will build on the features of that ship, the first newbuild for Regent in 14 years.

Among its hallmarks will be gourmet dining, plush lounges and spacious accommodations, including a rendition of the Regent Suite, a new class of ultra-luxurious suite that will debut on Seven Seas Explorer.

'When we began conceptualizing Seven Seas Explorer a little over four years ago, we knew from the onset that she would be something special and make an immediate and lasting impression in the marketplace,' NCLH president and ceo Frank Del Rio said. 'We expect that the positive impact on earnings and impressive return on investment from Seven Seas Explorer will be significant and that her sister vessel will make a similar contribution.'

Added Regent's Jason Montague, president and chief operating officer: 'We knew immediately from the overwhelmingly positive response we received from travel partners and past guests that Seven Seas Explorer was going to resonate with guests searching for the ultimate in luxury travel. The extraordinary demand generated by Seven Seas Explorer, including record-breaking booking volumes, reinforced our decision to expand our fleet with an additional ship that mirrors the same incredibly high standards of luxury.'

Details about the newbuild will be announced at a later date.

NCLH said it has committed financing from a syndicate of banks for export credit financing.

UBS analyst Robin Farley put the cost per berth at about a mid-single digit percent higher than Seabourn's next two deliveries, this year's Seabourn Encore and 2018's Seabourn Ovation. Those cost $366m each, or approximately $610,000 per berth.Seven Seas Explorer is currently under construction and scheduled to debut in July.