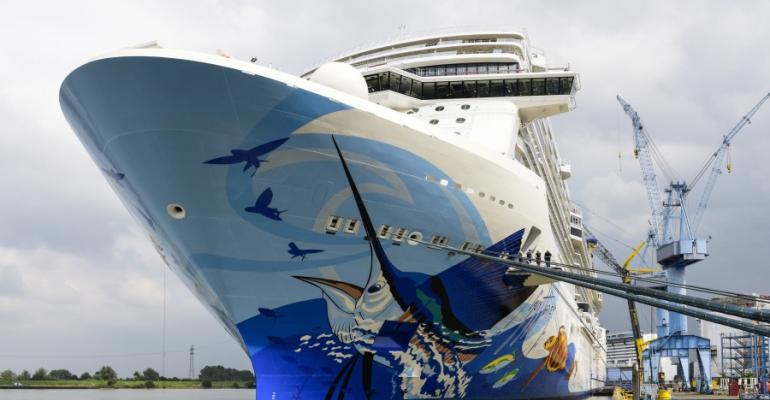 Norwegian Escape - among the reasons NCLH expects a breakout earnings year in 2016. The newbuild is pictured following its mid-August float-out at Meyer Werft (Photo: Meyer Werft)

Comfort with the balance of 2015, a longer booking curve, ceo Frank Del Rio-led revenue initiatives and Norwegian Escape are factors contributing to what looks to be an upbeat 2016 for Norwegian Cruise Line Holdings' financial performance.

During recent investor meetings the NCLH management tone was 'decidedly bullish,' stating 2016 will be a breakout year for earnings, Wells Fargo Securities said in a note.

When it comes to the booking curve, NCLH reported 196 days versus 158 days for the consolidated company, driven by the Norwegian brand, according to Wells Fargo analyst Tim Conder.

Wells Fargo said modest share repurchases are increasingly likely in the second half of 2015, with more sizable repurchases in 2016.

NCLH management reaffirmed a 'high degree of confidence' the company will meet its goals of $5 earnings per share in 2017 and a 14% increase in return on invested capital in 2018, Conder said.

The brokerage added a penny to its EPS projections for NCLH this year and next, with the 2015 number going to $2.89 and 2016's to $4.02, reflecting updated net yield, net cruise costs, fuel costs and share repurchase assumptions.