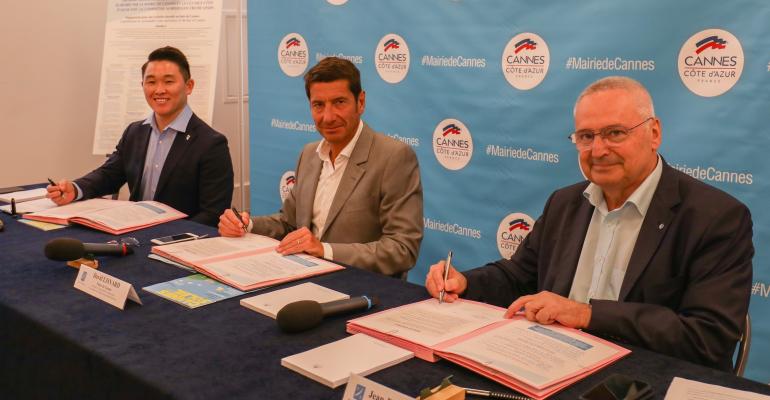 Going beyond the global 0.5% sulfur fuel cap for marine fuels in 2020, French Riviera port Cannes is restricting cruise vessels to 0.1% next year.

Last week Norwegian Cruise Line Holdings became the first operator to sign on to a Cruise Charter agreeing to the 0.1% limit. Silversea Cruises inked the pact Tuesday and MSC Cruises plans to do so in September.

The stricter sulfur limit has been imposed by Cannes Municipality and the Chamber of Commerce Nice Côte d’Azur, which operates the Vieux Port.

Part of a 'virtuous ecological circle'

'This significant action is a major step forward for the protection of the environment and is a continuation of the actions undertaken by David Lisnard, mayor of Cannes, and the French Prime Minister Edouard Philippe, to fight against marine pollution of the cruise ships,' a statement said.

'It aims to make cruise operators part of a virtuous ecological circle owing to strong environmental measures. The point is not to be against cruises but against pollution by favouring the ships which are respectful of the air, water and seabed quality,' Lisnard said.

The sulfur cap will take effect upon entry into the pilot area, located behind the Lerins Islands facing the bay of Cannes. Companies that don't sign the charter won't be allowed to land passengers from Jan. 1.

In Europe, apart from the North Sea and Baltic Sea Emission Control Areas where the sulfur limit in marine fuels is 0.1%, the maximum sulfur content in fuel for passenger ships is 1.5%, unless a call lasts more than two hours, which compels a vessel to switch at quay to marine diesel with 0.1% sulfur level. In 2020, the global sulfur content for marine fuels will go to 0.5%.

In order to protect the environment in the Bay of Cannes, the municipality and CCI Nice Côte d’Aur are inviting cruise operators to implement the lower 0.1% level. By signing the Cruise Charter, the companies commit themselves to this new requirement.

Intercruises Shoreside & Port Services contributed to facilitate this commitment and the agreement signature as NCL's port agent in Cannes.

Silversea then signed, and MSC will do so in September, Lisnard said, adding that the three cruise groups account for more than 70% of Cannes' calls and passengers.

Reduced air emissions, no discharge of sewage (even treated sewage) and respect for seabeds and posidonia (marine plants) by using special anchorage techniques are among the commitments included in the charter which reinforces and complements the Green Award offered by the French Riviera Cruise Club since 2007. It will be reviewed and updated yearly. Controls of each ship will be carried out at least once by the port authority, Cannes port and/or the pilot.

To encourage the companies to meet the charter requirements, they will be offered a €0.20 reduction in port dues per passenger. The amount will be remitted each year at the end of the last ship call.

Cannes is the fourth busiest French cruise port after Marseille, Ajaccio and Le Havre. It registered 162 calls and 370,000 passengers in 2018. More than 400,000 passengers are expected this year.

Tauck waives or reduces single supplement for a host of river cruises
Oct 05, 2022