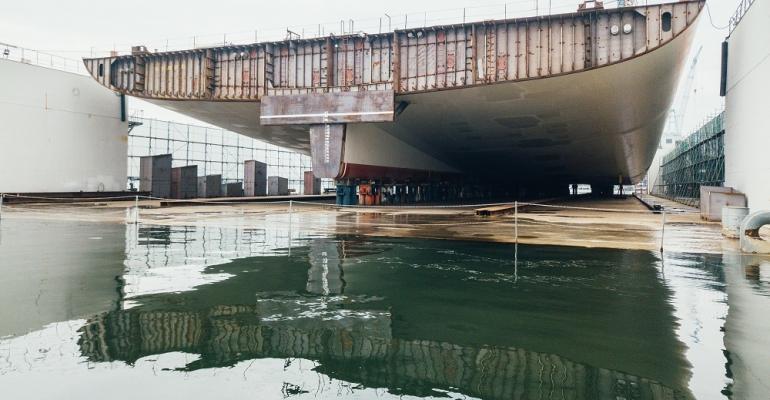 The 120-meter long and 42-meter wide section was floated out in preparation for towing to Meyer's Papenburg yard where AIDAnova is under construction. The transit is due to begin early Monday, weather permitting. Arrival at Papenburg is scheduled for early morning Sept. 28.

The engine block, officially referred to as floating engine room unit (FERU), is three decks high and carries AIDAnova's four dual-fuel Caterpillar engines. AIDA Cruises' latest fleet addition will be the world's first cruise ship able to run on LNG both at sea and in port.

Neptun Werft is going to concentrate on FERUs in the years ahead. €50m is being invested into the construction of a 13,000-square-meter building hall that's expected to become operational next March.

The cruise ships to be constructed at Meyer Papenburg and Finland's Meyer Turku over the next years will all be equipped with engine sections prefabricated at Neptun. Currently, the yard is also working on a double-end ferry tailored to German coastal operation, which will be delivered toward the end of the year.

AIDA Cruises said 500 shipyard workers and 500 external employees are currently working at Neptun. In addition, 120 Caterpillar staff are deployed to assemble the engines. The prefabrication of engine sections has become an important driver for the local economy in the Rostock area.