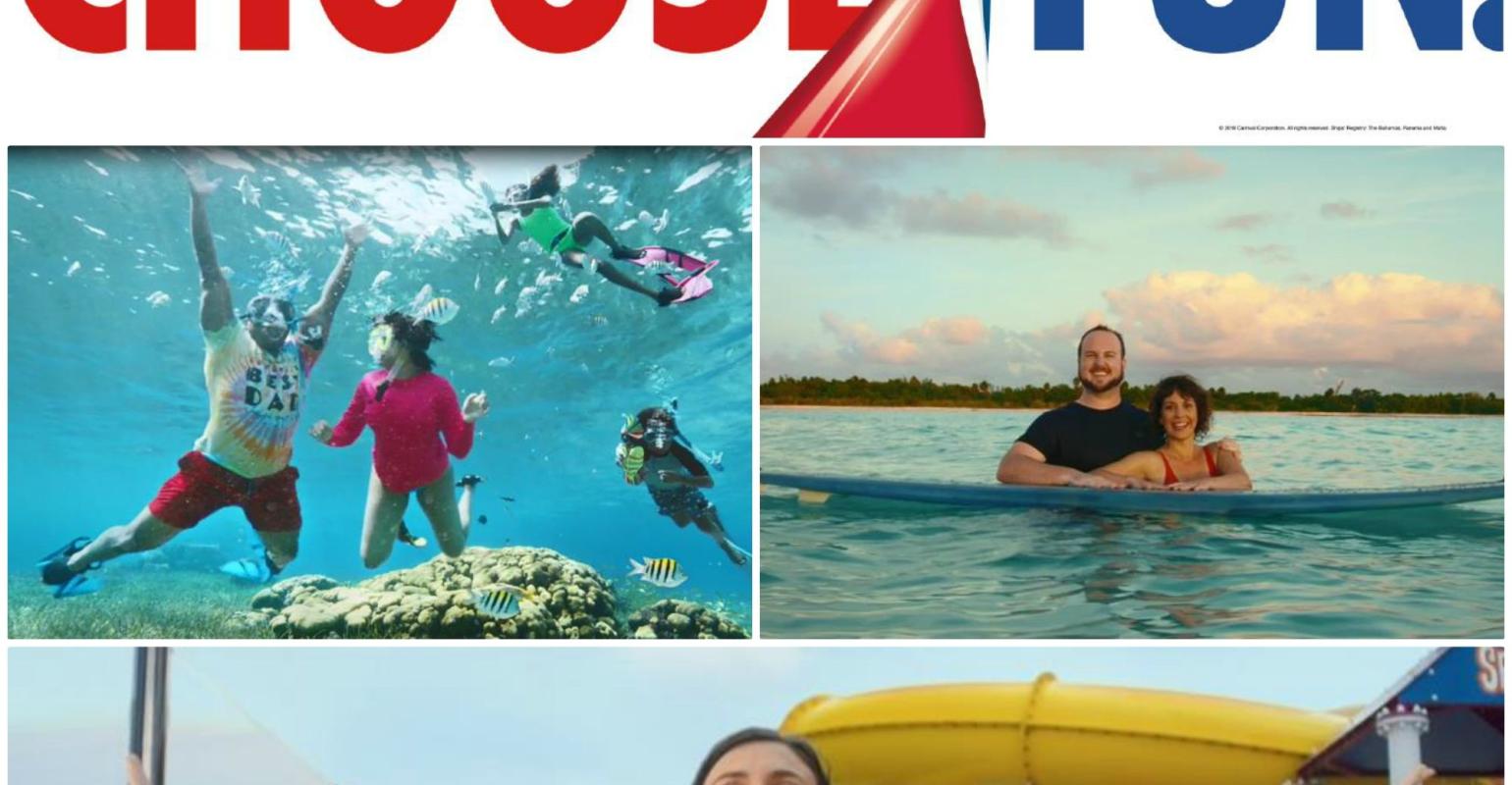 The 'Choose Fun' campaign includes 30-second television testimonials like the underwater 'Best Dad' who took his family cruising even though they didn't want to go and now they love it, a couple who can't stop posting pictures of themselves and Tracy/Stacy's water slide triumph

Carnival Cruise Line's new 'Choose Fun' campaign marks a return to national television for the Winter Olympics and has heavy digital and out of home components.

'We believe "Choose Fun" is a bumper sticker Carnival guests would proudly identify with—a rallying cry that inspires those who have never cruised to give it a try,' said Kathy Mayor, SVP and chief marketing officer.

Extensive research showed that those vacationing with Carnival choose to be their truest self, embrace positivity and have fun with others.

With everyone having a different definition of fun and Carnival offering an array of experiences, the line's new agency of record, Anomaly, built a campaign that links the same activities vacationers enjoy on land with those offered at sea. 'Choose Fun' aims to attract people who've never cruised but share the same values and passions.

The campaign launches with 30-second television testimonials depicting people who were initially reluctant to sail but were liberated on a Carnival cruise, along with five-second online video snippets customized to match content on various websites and viewer preferences, delivering one-to-one marketing.

The testimonials present unexpected situations such as a woman in her 30s braving a waterslide, a couple posing for Instagram-worthy photos and a family in snorkel masks conversing under water. Each video snippet, meanwhile, showcases a fun activity aboard a Carnival ship including biking in the sky on SkyRide, competing at Lip Sync Battle, enjoying the Punchliner Comedy Club and feasting on burgers by Food Network star and Carnival partner Guy Fieri.

The spots end on a distinctive ba-da-bum-bum-BUM! musical note and the blast of a ahip's horn.

'Choose Fun' will come to life in digital display, paid social media and modular online videos on platforms such as Amazon Video, Hulu, Roku and Vevo. The new advertising will also air on TV in the Atlanta, Houston, Dallas and Los Angeles markets during high-profile events like the Grammy Awards' Red Carpet and the NFL Playoffs.

Carnival returns to national TV for the first time since its last Winter Olympics placement in 2014. Speaking of the Olympics, the 'Choose Carnival' campaign features an arms up, Y-shaped pose that mirrors victorious Olympians and the distinctive Fun Ship funnel.

'Our brand revolves around participatory fun,' Mayor told Seatrade Cruise News. Seeking to inspire rookie cruisers, the campaign focuses on shared passions like music, comedy and food. Billboards, wallscapes, train wraps, in-taxi and airport messages are all relevant to the location or situation. A billboard: 'Sitting on a beach & by the pool & on a SkyRide & at a cantina & definitely not sitting in traffic. Carnival: Choose Fun.'

And placements in karaoke bars, comedy clubs or gyms—to name some examples—link directly with what's offered aboard ship.

Lin Humphrey, marketing professor at Florida International University, likes the campaign's use of testimonials because studies show 'we trust strangers as peers more than we trust celebrity spokespeople.' He pointed to the popularity of user reviews on Yelp and Amazon as examples.

A big chunk of the media spend is in digital, which allows Carnival to be very targeted and provides for sequential messaging.

This is another strong element, in Humphrey's view, since research has confirmed repeated exposure to five-second snippets of the kind Carnival is using can affect brand choice. And an integrated campaign, he said, is vital to being relevant to the customer and the stage of the 'customer journey' they're in.

Humphrey also really likes some of the shorter assets such as the horn blowing at the end of each spot. 'We're no longer mono-tasking,' he said. 'They did a good job of making you look and see what the logo is ... In a very cluttered message consumption environment, they definitely caught the attention at the end.'

The simple and impactful logo, on a white backdrop, 'works really well for out of home [advertising],' he added. 'It is super clean.' People can't process complex images when just passing by in a car or on foot, so out of home advertising must be as simple as possible, Humphrey said, yet convey feelings and emotions.

Carnival's overall media spending is equivalent to last year's advertising, according to Mayor, however national TV is a channel Carnival didn't use then. She said the Carnival team is disciplined in not growing net cruise costs faster than the rate of capacity growth.

Overall, 'Choose Fun' isn't a huge departure from Carnival's prior 'Fun For All. All For Fun,' Humphrey noted, but 'enough of a pivot' to stand out.

'Messages need to be integrated, consistent and adapted for the channel, and this does it,' he said of the campaign.

There's no trade component. However, Carnival's Adolfo Perez, VP sales and trade marketing, and his team will be amplifying the message in a number of ways.

The new logos, Facebook and web banners and videos will be available at GoCCL.com for travel agents to use in their marketing and share on their social channels and in emails. Business development managers will be sending alerts to agents, and Perez is posting about the campaign on his Facebook trade page.

Working with Anomaly, Mayor said, has been 'wonderful.' The agency has the digital expertise Carnival sought, and the chemistry between the cruise line and Anomaly teams was 'immediate' and 'great.'